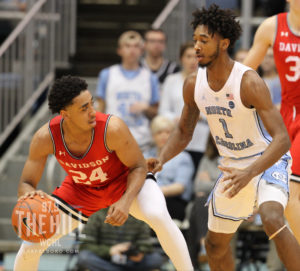 Davidson has a player who grew up in Chapel Hill rooting for Duke.

If most of the large turnout at the Smith Center didn’t know it, the fans learned during starting lineups that Davidson guard Carter Collins hailed from Chapel Hill. The 6-3 sophomore was starting for the Wildcats’ injured leading scorer Kellan Grady, who has a 19.4 average and whose absence severely compromised his team.

Collins played 37 minutes and scored nine points, shooting far below his season numbers of 54 percent from the floor and 43 percent from 3-point range. The graduate of East Chapel Hill High had played on the Smith Center court in pick-up games and on one of those biddy basketball teams that  scrimmaged at halftime of Carolina’s 82-60 win.

Afterward, Collins said his parents told him to go out there and play his game. His father, Duke transplant surgeon Brad Collins, was wearing his royal blue colors and his mother, dentist Kim Spaulding, wore Davidson red pants but a far more neutral sweater.

After all, she owns three degrees from Carolina – undergraduate, Public Health and UNC Dental School. She and her partner have run a practice in Cary for 30 years. Carter wanted to play football in high school, but Kim had fixed too many broken teeth to allow that.

The Collins family, including daughter Kennedy, a freshman at Princeton, were there to cheer on Carter and his team, although without Grady they all knew it would be hard to beat the Tar Heels, who were coming off a tough loss to Kentucky. But it very much seemed like college basketball with the right perspective.

Davidson fans were hardly heart-broken over the loss to a nationally ranked opponent. Carter Collins had been in plenty of big games already, including two state high school tournaments with the East Chapel Hill Wildcats and last year’s NCAA tournament loss with his current Wildcats to the Kentucky Wildcats. Wildcats, wild.

Raising his family, Brad Collins set the tone at their home on the northwest side of town when Duke and Carolina played. Everybody rooted for the Blue Devils – except Kim, who now loves the team in red and the one wearing powder blue. So, Saturday, she couldn’t lose.