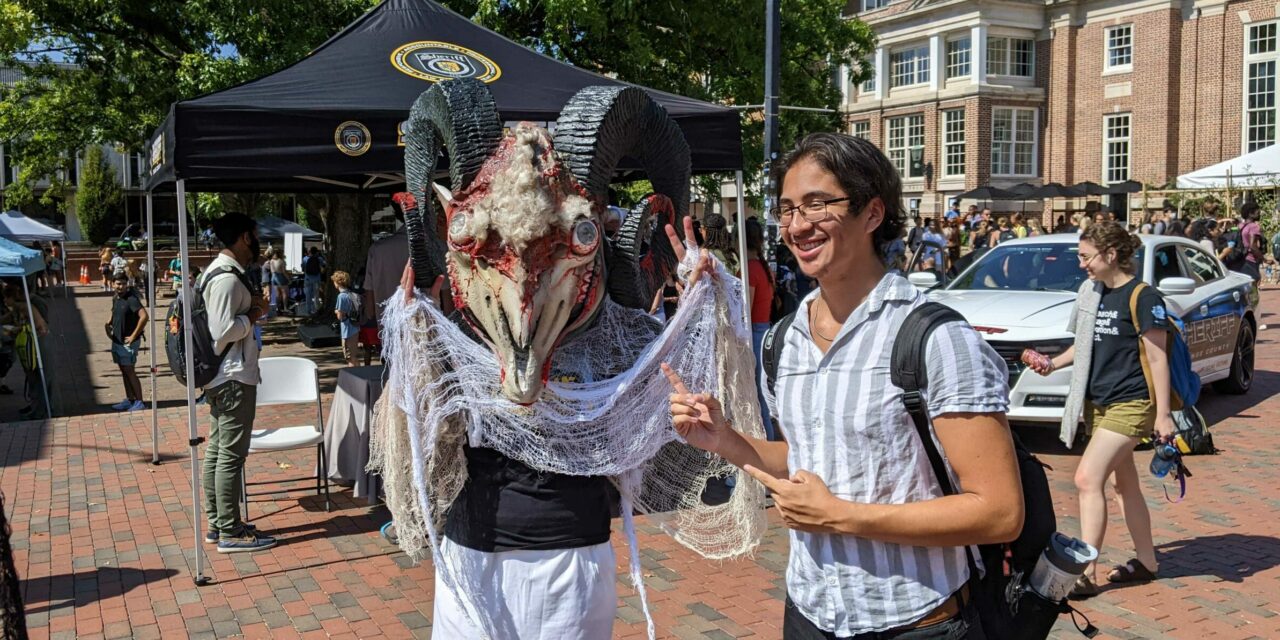 The Pit on UNC’s campus is treated as a central hub of activity during the school year. Walking by, you can typically see just about anything happening nearby.

And on Thursday, that included zombies.

About a dozen zombies (dressed in Hollywood-level makeup) roamed around the Pit and between booths set up by fire, police, UNC officers and more. The Zombie Preparedness Festival was held with the purpose of showing students that if they could be prepared to deal with zombies, they can prepare for much more common emergencies and hazards.

Darrell Jeter, who leads UNC’s Emergency Management department, said the national Centers for Disease Control initially came up with the phrase in 2011. The university got the idea to hold its own festival a few years ago, with the return from COVID-19 delays being the perfect time to remind students of important measures to take.

Jeter said while the topic of crisis preparedness might not be top of mind for college students, it’s critical they know what to do in an emergency.

“While their focus needs to be learning and the campus experience, we also realize that sometimes they might encounter unsafe situations,” he said. “And we want to make sure they know that while they’re here on campus, we have their safety top of mind for us, but campus safety is all of our responsibility. We want to partner with them so that they can take care of themselves while we take care of the broad community.”

That included trying out a fire extinguisher for first-year student Azario Cloete, who picked up a canister at a booth toward the edge of the festival.

“I guess it’s a good thing I’ve never had to use a fire extinguisher before, but this was very helpful to know in the future,” Cloete said after spraying some flames. 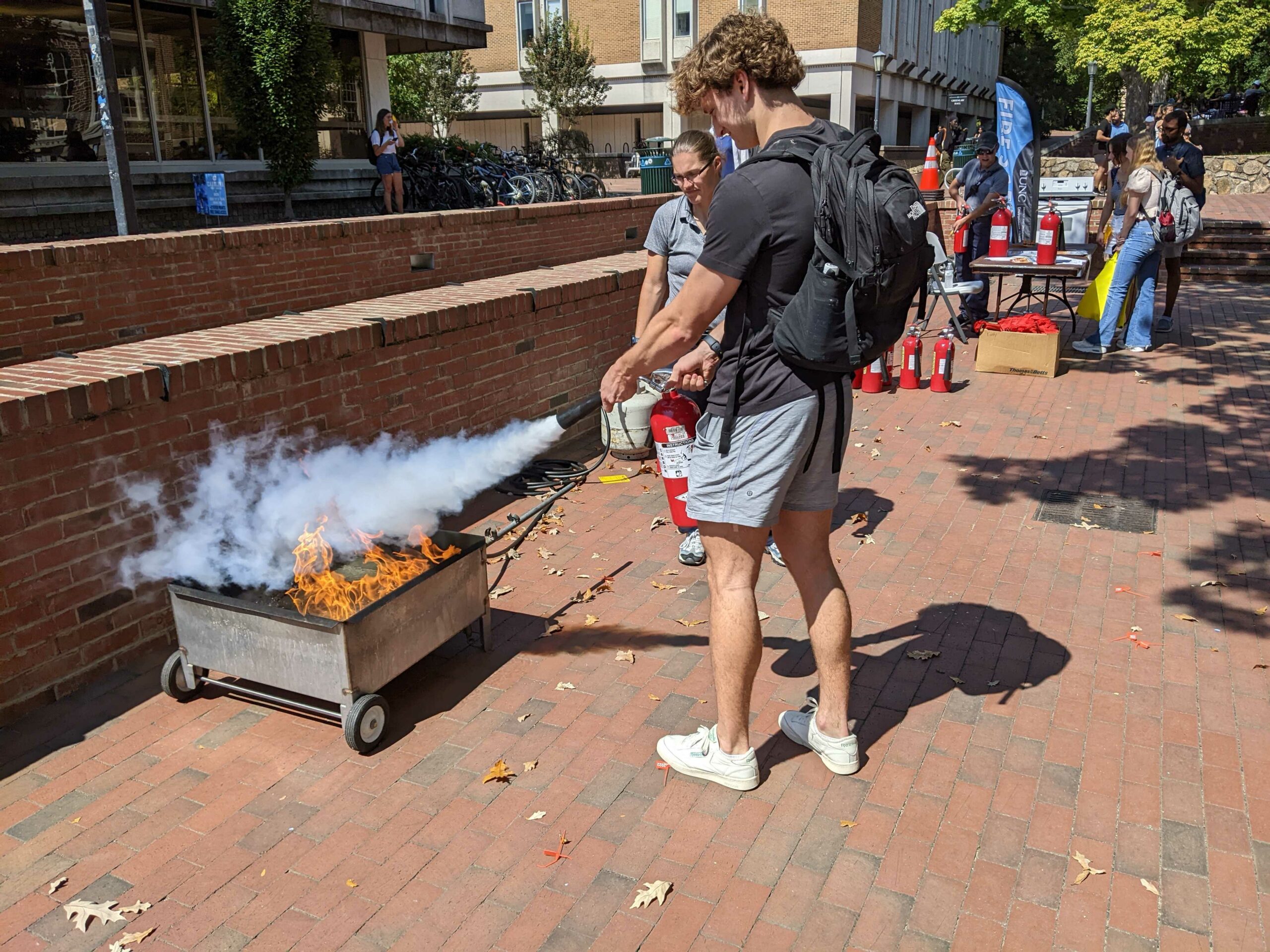 A student grabs a fire extinguisher and practices spraying it in UNC’s Pit. 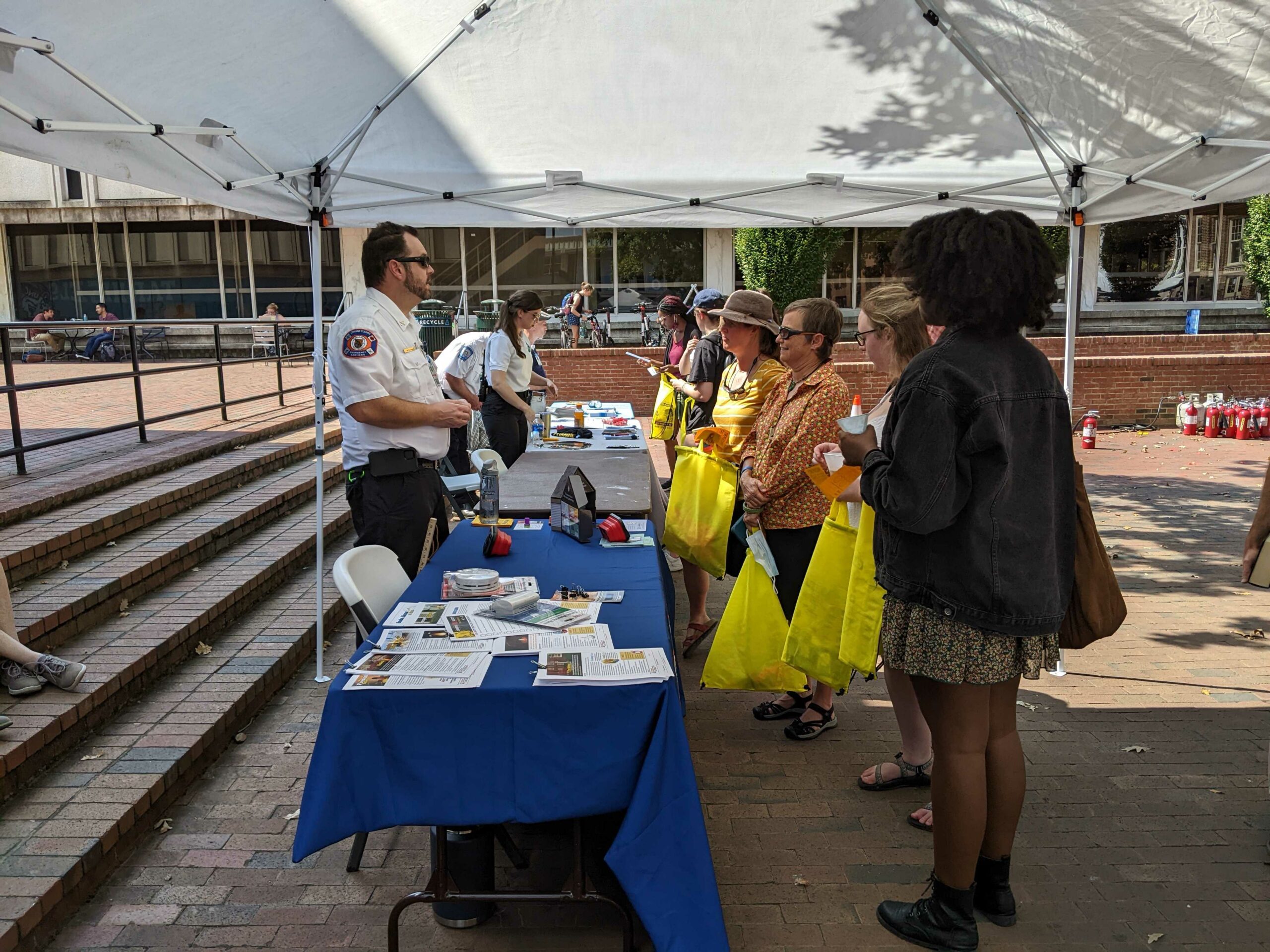 As if zombies weren’t eye-catching enough, part of the festival included a demonstration on the difference in-room fire sprinklers make during a blaze. Two model dorm rooms were set up in Polk Place and set on fire to show the extent of damage and the danger of tampering or removing a sprinkler system. 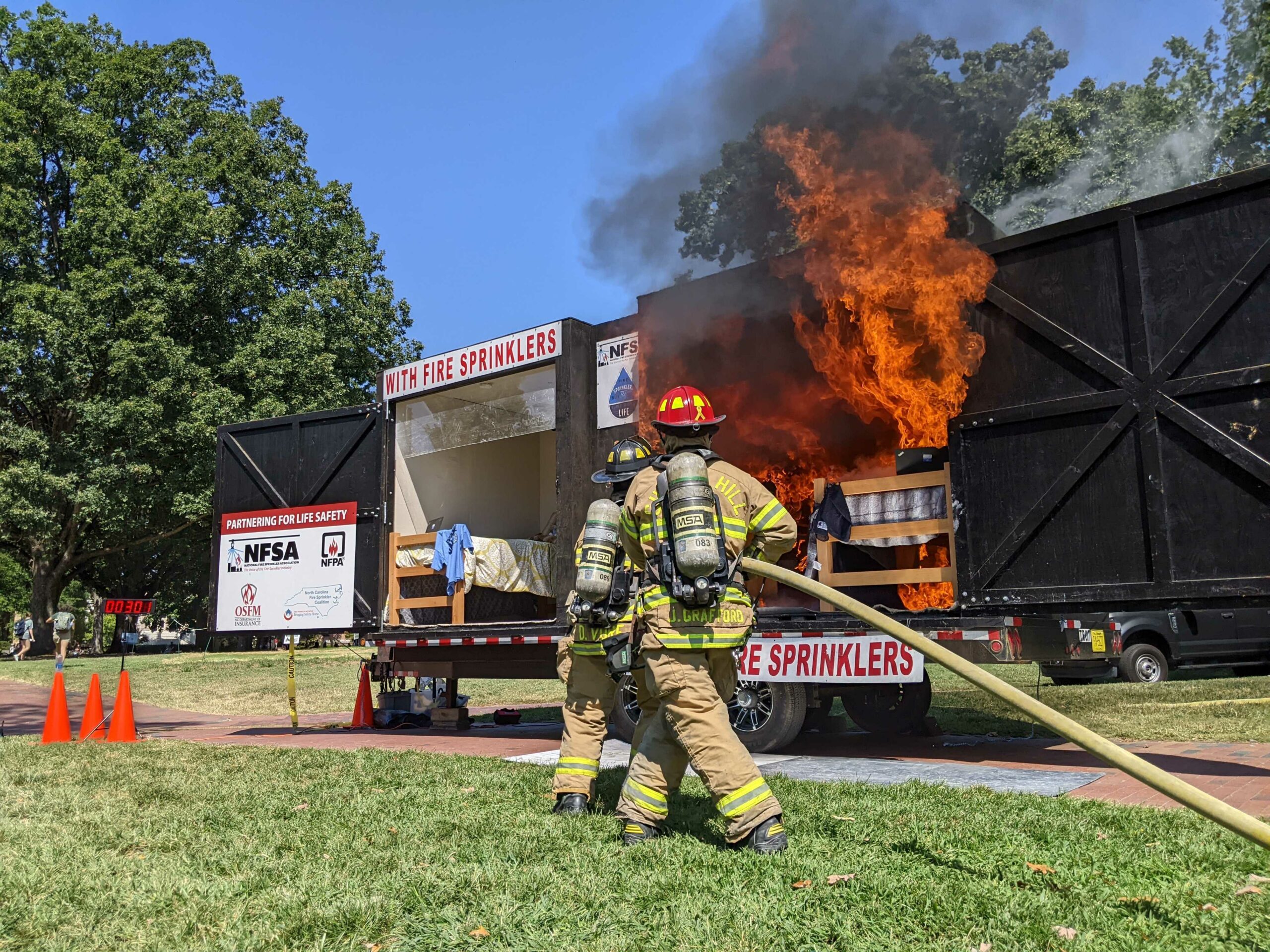 Chapel Hill fire fighters break out the hoses to put out a demonstration blaze in a model dorm room. 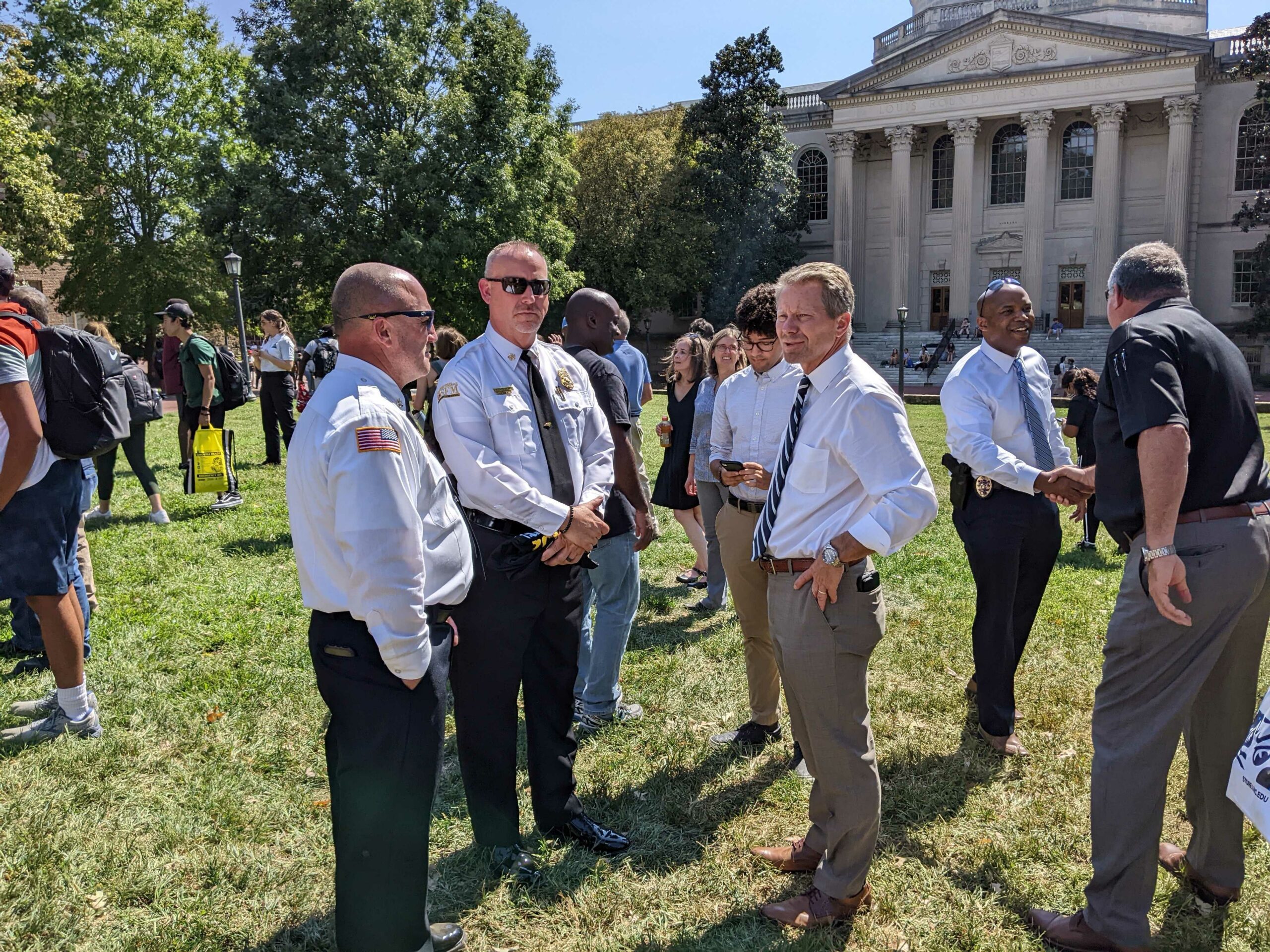 Chapel Hill Fire Department led that spectacle, with Public Information Officer Alex Carrasquillo saying students should remember that campus falls within the department’s response area. He also said the visual or hands-on components of the day effectively helped educate the students he saw drop by.

“A lot of our set-ups had attention because you could try something and see something and experience something, versus stopping by and us not having much to show,” Carrasquillo said. “I think having that hands-on element helps get the message across.”

That rang true for UNC freshman Jacob Emejuru, who watched the fire demonstration and said it reflected “the price of not being prepared.”

“While we’re told this, it’s better to visualize it and see it. Because that dorm room, it looks a little bit like my dorm room – with my stuffed animals and my blankets. And that could be me if I don’t have automatic sprinklers.”

Emejuru said the booths and information in the Pit on Thursday may have even sparked an interest in exploring public safety or emergency response as a career.

“My mom, she has this motto for preparedness,” he described. “She says, ‘people who are over-prepared are [like] idiots, except for the one moment when they’re geniuses.’ You may go through these fire drills and you may think they’re annoying or superfluous. But there comes a day where that really, really matters.”

Jeter echoed that message, saying he hopes all community members in greater Chapel Hill will take action to be informed, prepared and empowered to confront any emergency that may arise.

Including, if necessary, zombies.