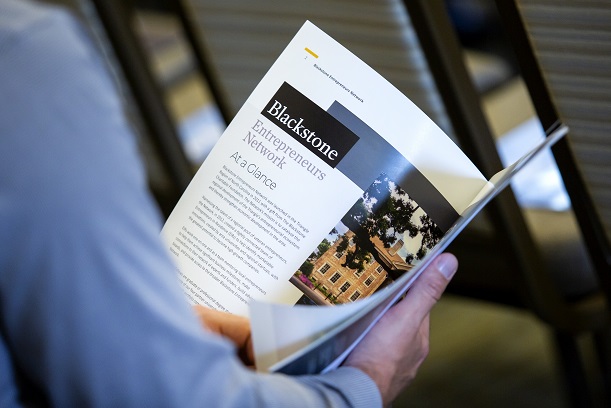 When Judith Cone, vice chancellor for innovation, entrepreneurship and economic development at UNC – Chapel Hill, heard that the Blackstone Charitable Foundation was going to be setting aside millions of dollars to fund entrepreneurship programs, she was immediately interested in submitting a proposal.

“[Blackstone] said, ‘well, we don’t want to just fund one university, but we’re really interested in the Triangle. If you could get the universities to get together, come up with an idea, then we would listen to it,’” Cone said in a recent interview recounting the process that led to a 2011 Blackstone investment in the area.

UNC officials then approached counterparts at Duke, North Carolina Central and North Carolina State, which led to a joint proposal to Blackstone, a global investment firm.

“What we were trying to do is to get the best entrepreneurs in the region to come together as a group,” Cone said.

This process included bringing in individuals like Don Holzworth, now the executive in residence at UNC’s Gillings School of Public Health, who had successful business backgrounds.

“It’s been very interesting,” Holzworth said, “at first probably viewed with a bit of suspicion but very quickly – given my love of science and global health and understanding the issues that they’re studying – I was able to bring insights that they otherwise would not have had.”

Holzworth said that faculty and students were also able to bring perspectives he had not considered.

The partnership with Blackstone and an effort from UNC administrators to have everyone on campus thinking in a more entrepreneurial way has led to more startups and spin-offs coming from the campus. It has also led to the start of the Carolina Angel Network in 2017, a group of investors in place to held advise and fund new business ideas. Similar groups are either established or in process of being established at the other institutions across the Triangle which make up the Blackstone Entrepreneurship Network.

Amy Stursberg is a senior managing director at Blackstone and serves as the executive director of the Blackstone Charitable Foundation. She said via email that the Triangle had the “elements of a strong startup region – intellectual capital and talent, research dollars, entrepreneurs with successful exits.”

But there have been challenges along the way in not only getting the campus community to think in a more business-like fashion, but also recognizing which ideas have commercial viability.

“Having real, live coaches that have been there and done that,” Cone said, “it’s a reality check. And they are not all that sympathetic; they are tough, because they know the business world is very tough.”

Holzworth said it is also important for faculty to realize the commitment it takes to run a growing business and understand that may not allow them to continue with both the business and their research at levels they would like to be successful.

Cone said that coaching has led to growth in both the pitching process, when individuals are hoping to receive funding for their ideas, and the actual running of the subsequent businesses.

“People that have gone through this many, many times,” Cone said, “they’ve failed; they’ve done well; they understand it. And that’s who needs to be coaching these promising companies.”

Understanding that failure is a part of the pathway to a successful venture, Holzworth said, was an important lesson to learn and one that is better learned earlier in life.

“The undergraduates who are going through that process are learning to fail early,” Holzworth said. “And failing early and often is not a bad thing when you’re young.

“That’s part of the learning experience.”

UNC officials said that 250 local companies have been mentored and more than $430 million in funding had been raised in the six years since the Blackstone partnership was launched with the local universities.

Through the Blackstone Entrepreneurship Network, the angel investments and the creation of multiple Makerspaces on the UNC campus, it appears as though the entrepreneurial mindset has taken hold of the entire campus community.