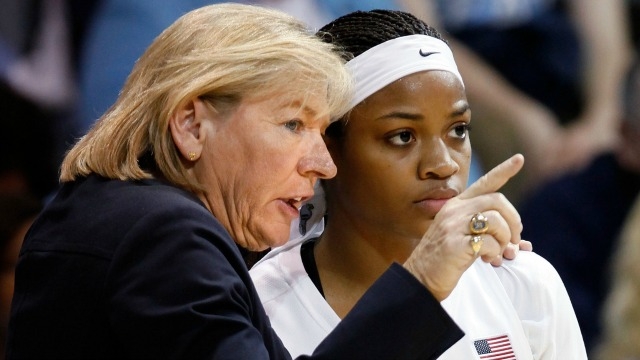 The investigation into the UNC women’s basketball coaching staff stems from “a series of racially offensive remarks” made by head coach Sylvia Hatchell, according to the Washington Post.

Sources close to the program have indicated the investigation was due to comments that were racial in nature and made in the presence of players. The Washington Post report details the allegations as being that Hatchell once suggested the players would be “hanged from trees with nooses” by upcoming opponents if their play didn’t improve.

The Post cites interviews with “seven people with knowledge of the investigation, including six parents of current players.” The report says the parents spoke on condition of anonymity.

Hatchell’s attorney denied the allegations on Thursday, according to the Post, instead saying the coach had told the players that ACC opponents would “hang us out to dry.”

UNC placed the entire coaching staff on paid administrative leave on Monday while a review of the program takes place. The university said that an outside firm would “review and assess the culture of the women’s basketball program and the experience of our student-athletes.”

Thursday’s Washington Post article also indicates players were asked to play through injuries or that the severity of injuries were not taken seriously.

When asked at the UNC Board of Trustees meeting on Thursday, a university spokesman said there was no public update available on the investigation.

During the 2018-19 season, UNC women’s basketball finished 18-15 (8-8 ACC) and lost in the first round of the NCAA Tournament to California. The high point of the season was an upset over then-No. 1 Notre Dame in Chapel Hill.

Hatchell has coached at UNC since 1986 and has amassed a 751-325 record with the Tar Heels along with a national championship in 1994. She was inducted to the Naismith Memorial Hall of Fame in 2013.

In September 2016, the university renewed Hatchell’s contract through the 2019-20 season despite the women’s basketball program being a major focus of the NCAA’s investigation into academic fraud.