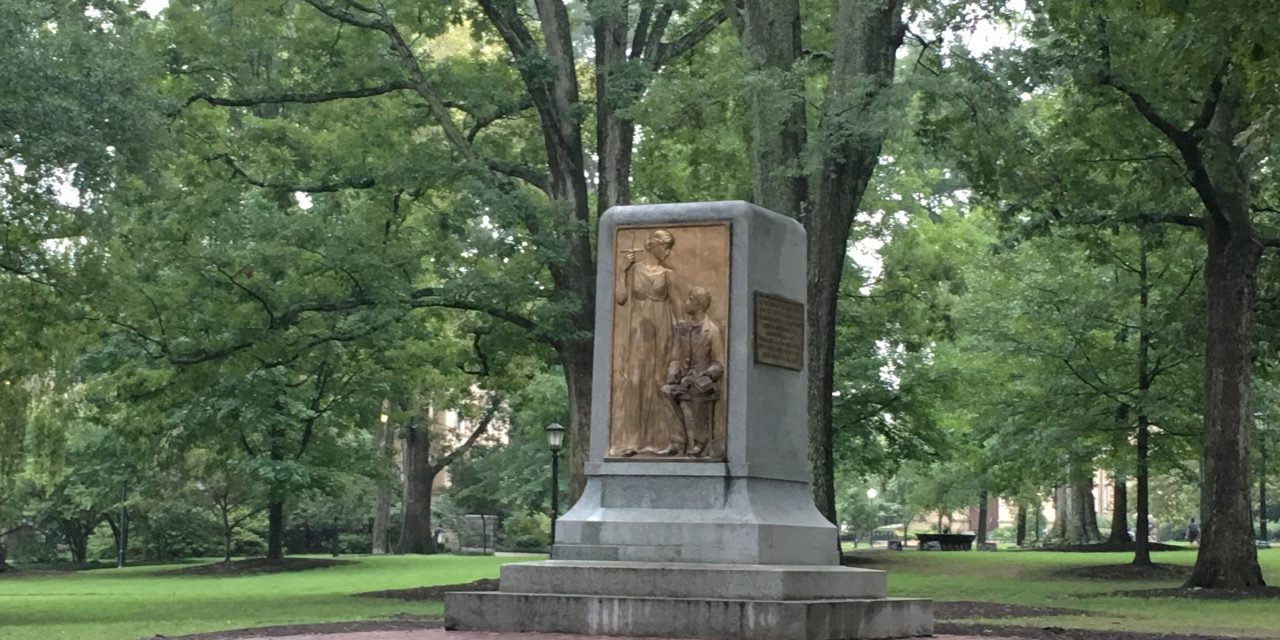 Walking around the UNC campus just after six o’clock Monday evening, nothing seemed out of place ahead of the fall semester. A buzz was in the air as new students joined those returning for another academic year in Chapel Hill.

And on McCorkle Place, fronting Chapel Hill’s Franklin Street, a familiar statue was in place: the Confederate monument known as Silent Sam. But three hours later, the monument erected in 1913 that has been a flashpoint of protests for years was face-down in the mud.

Rallies calling for the removal of Silent Sam have become almost commonplace in recent years. Another was scheduled for Monday night, beginning at Peace and Justice Plaza across Franklin Street from the monument.

Large banners were rolled out that stood nearly as tall as the old Post Office building.

Similar comments have been made at nearly every protest of the statue in recent years.

Little described Silent Sam as “a memorial to white supremacy and to slave owners and to people who murdered my ancestors.”

Two black graduate students who also spoke at Monday night’s protest placed nooses around their necks as a symbol of the violence they felt Silent Sam represented.

“Walking the crowded campus of UNC – Chapel Hill as a black man can be a lonely experience,” one said as he read an open letter he had written to Chancellor Carol Folt.

“When you have to take the long way between classes in order to avoid the sight of a statute that denies your human dignity,” he continued, “the southern part of heaven can feel an awful lot like hell.” 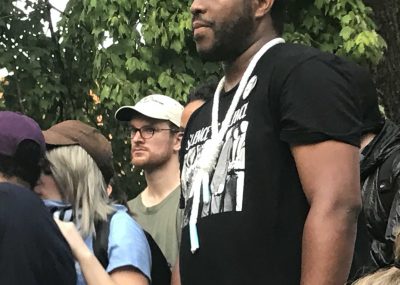 Two black graduate students walked with nooses around their necks to symbolize the violence they believe Silent Sam represented.

Protesters then marched with the large banners across Franklin Street and toward Silent Sam. As they approached the monument, some protesters had their faces covered by bandanas, which is illegal to do at a public rally in North Carolina.

That led to contentious moments with police clashing with protesters; one individual was arrested and charged with resisting arrest and concealing one’s face during a public rally.

Protesters blocked the view of Silent Sam with the large banners and formed a human wall around the base of the monument.

There were some pro-Silent Sam individuals around the statue, occasionally engaging with the protesters.

The rally began to spill over onto Franklin Street, with protesters blocking the intersection of Franklin and Columbia streets. When they arrived back at Silent Sam, around 9:20 p.m., the statue was pulled down with what appeared to be a rope tied around the head of the monument.

Reaction poured in from each side of the argument after the statue was pulled down.

Chancellor Folt acknowledged that the monument has been “divisive for years, and its presence has been a source of frustration for many people not only on our campus but throughout the community.”

But she called Monday’s actions “unlawful and dangerous, and we are very fortunate that no one was injured.”

Democratic Governor Roy Cooper is currently petitioning the North Carolina Historical Commission to move three Confederate monuments from the old Capitol grounds to a Civil War battlefield site in Johnston County. Cooper’s office said in a statement, “The Governor understands that many people are frustrated by the pace of change and he shares their frustration, but violent destruction of public property has no place in our communities.”

That state commission is scheduled to meet on Wednesday and discuss Cooper’s request.

The commission was tasked with making recommendations regarding requests to move Confederate monuments through a 2015 law passed by the Republican-led General Assembly. Folt has maintained that she would have ordered the monument be removed, but she is limited by the 2015 law.

The system’s Board of Governors have also said they were awaiting further guidance from the historical commission but did not submit a request to move the monument.

Local state lawmakers filed a bill earlier this year that would have relocated Silent Sam, but the bill was never acted on during the short legislative session.

A criminal investigation is ongoing regarding those involved with pulling down the monument. There is no official word on where facilities personnel moved the statue after it was pulled down or future plans for the site.