‘Southern Heritage’ Rally Could Bring 1,500 to Hillsborough on Saturday 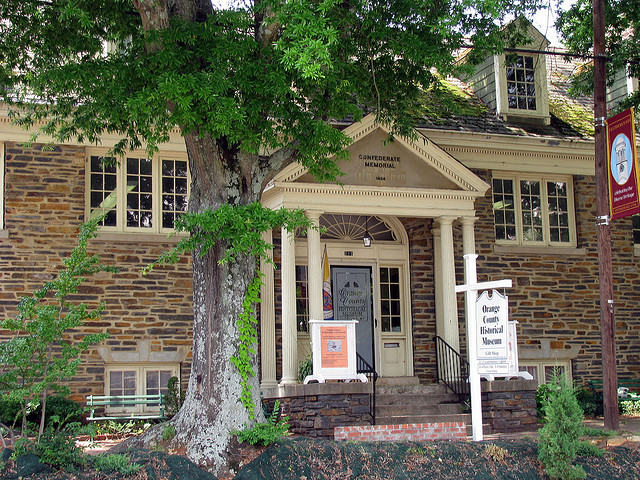 The Town of Hillsborough is preparing for a rally in support of Confederate heritage this Saturday that’s expected to draw more than 1,500 people.

Billed as an “educational rally about Confederate heritage,” the event is organized by a group called Orange County Taking Back Orange County.

Members are hoping to draw attention to an effort by Hillsborough leaders to remove the words “Confederate Memorial” from a building built in 1934 that now serves as the Orange County Historical Museum.

The “Southern Heritage Ride and Rally” was inspired by a similar event in Alamance County last month that drew more than 1,000 supporters. Participants will drive from Burlington to Hillsborough then gather at 2 o’clock on the lawn of Town Hall for two hours of songs and speeches.

In a press release, Police Chief Duane Hampton says: “This is going to be a very challenging event for public safety to manage, and we are asking for and appreciate the community’s patience and help as this event happens.”

Multiple law enforcement and emergency management agencies will be on hand to direct traffic. Officials are asking “citizens who would like to express a counter view… to do so at another time.”

Police are also warning of traffic delays before and after the event. In addition to the rally, the Carolina Tarwheels Bikefest event is slated to come through Hillsborough on Saturday, with 850 cyclists visiting historic sites in and around town.

Police are reminding the public that weapons and alcohol are not allowed at the rally. You can learn more about parking options and street closings here.

In response to the planned “Southern Heritage” rally, the North Carolina chapter of the NAACP is hosting an event Thursday morning in Hillsborough called a “News Conference for Historical Accuracy.”

Reverend William Barber will commemorate the passage of the Voting Rights Act of 1965, and address the Governor’s decision to sign a bill protecting Confederate monuments.

That gets underway at 11 a.m. in front of the historic Orange County Courthouse at the corner of North Churton and East King streets in downtown Hillsborough.