Students in North Carolina’s public schools receive grades for their performance each year – and so do the schools themselves.

But is North Carolina’s school grading system actually measuring the quality of a school – or is it picking up some other variable?

And if it’s not really measuring quality, how should the system be reformed?

That’s the question facing the General Assembly this year, and debate is heating up across the nation as well as here in North Carolina. The national debate is a product of the Every Student Succeeds Act (ESSA), passed by Congress in December 2015; among other things, ESSA asks states to reexamine their priorities, their standards, and their approaches to measuring school quality.

In North Carolina, the state assigns an A-F grade to each public and charter school – based on a formula that currently emphasizes “performance” over “growth.” (In other words, the state gives more weight to the percentage of students who achieve passing grades on standardized tests – and less weight to whether individual students actually improve their scores from year to year.)

But education experts on both sides of the aisle say the “performance” approach is flawed – and not just because it fails to reward schools that get their students to improve.

Jaime Detzi is the executive director of the Chatham Education Foundation. She says “performance” doesn’t just come from what goes on inside the classroom – it’s also a function of a student’s life outside the classroom too.

Students living in poverty, most notably, have numerous disadvantages that hold them back. Among others: often they go hungry, which hurts their ability to stay focused in class; they don’t get preventive medical care, which makes them more susceptible to illness; and many don’t have access to books in their homes, which can be a key factor in long-term academic achievement.

In Chatham County, the correlation is striking. 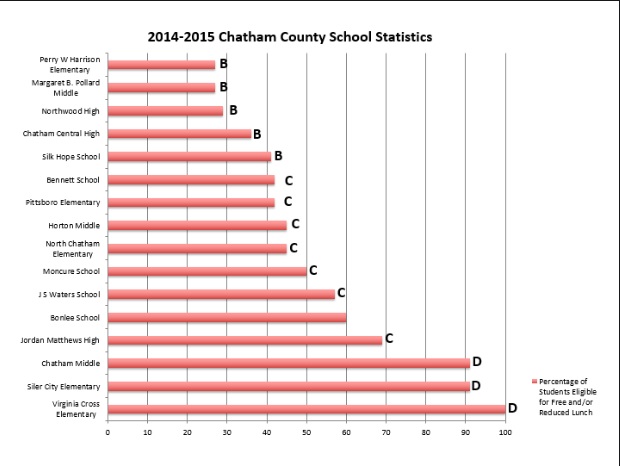 There were no exceptions.

How should the state’s grading system be fixed? Detzi says North Carolina should focus more heavily on “growth” rather than “performance,” to reward schools whose students improve from year to year. (“Growth” is not a partisan issue: progressive and conservative leaders both agree that “growth” is preferable to “performance.”) Such an approach, she argues, would give schools credit for encouraging improvement among “low achievers” who don’t quite reach ‘passing’ level but still make big strides – as well as “high achievers” who continue to improve beyond merely ‘passing.’

But “growth” is only the tip of the iceberg. Among other things, Detzi says the quality of a school is also a product of culture: how effectively the school produces an environment conducive to learning. (That can vary from student to student, she says: different school ‘cultures’ work better for different kids.)

Visit ChathamEducationFoundation.org to learn more about the Chatham Education Foundation – and how you can get involved.