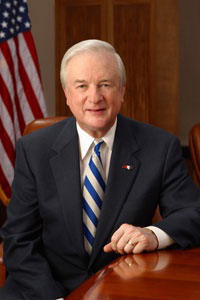 The award recognizes Hunt’s public service on behalf of children and families in North Carolina. He was honored on May 23 at the George Watts Hill Alumni Center where he spoke about his time with the institute.

“FPG has been a major force for the good of children now for five decades. That’s a remarkable achievement, unmatched anywhere in our nation,” Hunt said.

Hunt spoke about his initiative, Smart Start, which he established in 1993.  Smart Start supports local nonprofit organizations as they help children enter school healthy and prepared to succeed.

“It’s not enough to just love little children and want to help them. We have to know how to measure the success of what we’re doing and find ways to do it better – meaning to help them more. It’s conducting valid research to find out if Smart Start and NC Pre-K were really working and allowed them to be expand them to 100 counties.”

Also during his 16 years as governor, Hunt created the National Board for Professional Teaching Standards, chaired the National Commission on Teaching and America’s Future and worked to establish the North Carolina School of Science and Math. Hunt said these experiences helped him develop a sense of responsibility for the children of North Carolina – something he said will continue to grow.

“By 2030, that’s a about 14 years from now, you here will be the seventh largest state in America. I want you to think about that and the opportunities that gives us. And the responsibilities that puts on us.”

Hunt also started a reading program in elementary and middle schools and advocated for full-time teaching assistants in public classrooms for grades one through three. These initiatives helped him to focus on education in underserved and impoverished areas.

“In a state where we claim in our toasts to be a place where the weak grow strong and the strong grow great, FPG has meant the world to the children of North Carolina – especially poor children and their families.”

The ceremony was part of the institute’s 50 year anniversary celebration. And while celebrating the group’s past accomplishments, Hunt also stressed the need to prepare for the future.

“I think this great state, if it wants to be greater, and all that it’s capable of, ought to provide quality, early childhood education for every single child that needs it in 100 counties.”

The award ceremony kicked off the two-day conference that focused on reforming childhood education and care in North Carolina.