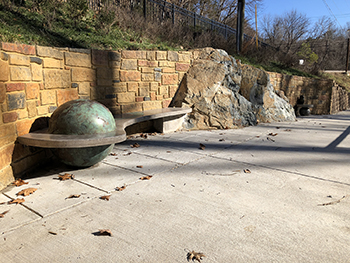 Chapel Hill will be honoring a trailblazing elected official on Saturday.

The town will hold a public art dedication to the first openly gay Town Council member on Saturday.

Joe Herzenbger – who is described in a release from the town as the first openly gay elected official in the South – served on the Town Council from 1979-81 and then again from 1987-93. He is one of nine civil rights advocates recognized at Peace and Justice Plaza in Chapel Hill.

Council member and civil rights attorney Allen Buansi made a point at Wednesday’s Town Council meeting to invite the public to the dedication ceremony this weekend.

“[Herzenberg] made a lot of contributions in the way of our parks and recreational services,” Buansi said. “So, I encourage folks, if you can make it out there, to be out there in support and memory of him.”

Herzenberg was a history professor who served as chair of the Town Greenway Commission and the Merritt’s Pasture Committee. Officials said he “continued to advocate for open space and environmental preservation” even after leaving the council.

The public art being dedicated to Herzenberg is a concrete and bronze bench on a new portion of the Bolin Creek Trail just west of Martin Luther King Junior Boulevard. The bench was funded by the Friends of Chapel Hill Parks and Recreation Department and was designed by the artists famous for the bronze sculpture of Major the Bull in downtown Durham – Michael Waller and Leah Foushee Waller.

The dedication is scheduled for 10 a.m. Saturday, March 10, and staff from the parks and recreation department will be leaving from the Umstead Park parking lot at 9:30 a.m. and answering any questions about the trail and the project along the way for any residents interested in joining.