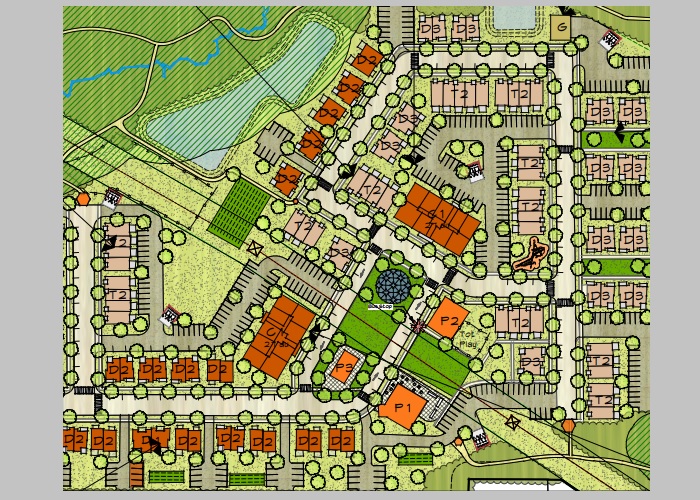 The plan calls for a multi-family residential project that would add 95 affordable units to the town’s housing stock. The proposal includes assisted living facilities, duplexes, apartments and some community spaces and amenities.

There are currently four single-family homes on the site that would be removed as part of any potential redevelopment, documents show, which could only come if the property were rezoned by the Chapel Hill Town Council and a Special Use Permit was issued.

The Community Design Commission reviewed the concept plan at a meeting in late October and “generally supported the site plan,” according to town documents. The commission said that the density was appropriate for the project but had some suggestions for the developers, including more connectivity between neighborhoods and interconnecting with the main Carol Woods location, which is across Sunrise Road. Commission members also said they would like to see the Habitat for Humanity portion of the project more intermingled with the Carol Woods segment of the proposal.

The developer was also encouraged to reduce the impervious surface in the proposal, create more community green areas and include traffic calming measures.

The traffic increase with the development is one of the concerns put forward by the Sunrise Coalition, a group representing the neighbors in the area.

The group said it “welcomes solutions to the affordable housing crisis for working families and for senior citizens. However, it also has grave concerns related to this proposed development’s size, scale, and potential negative impacts,” according to a letter submitted to the Town Council.

Beyond the traffic concerns, the coalition opposed the density of the project and said it had concerns on the environmental impact, noise pollution and social and economic isolation. Those concerns have been echoed in emails from individual community members to the Town Council.

The concept plan is scheduled to be reviewed by the Town Council Wednesday, allowing council members to communicate any concerns with the developers. A more detailed plan would then have to come back to the council for approval before the project could move forward.

Wednesday’s meeting is scheduled for 7 p.m. in Town Hall.