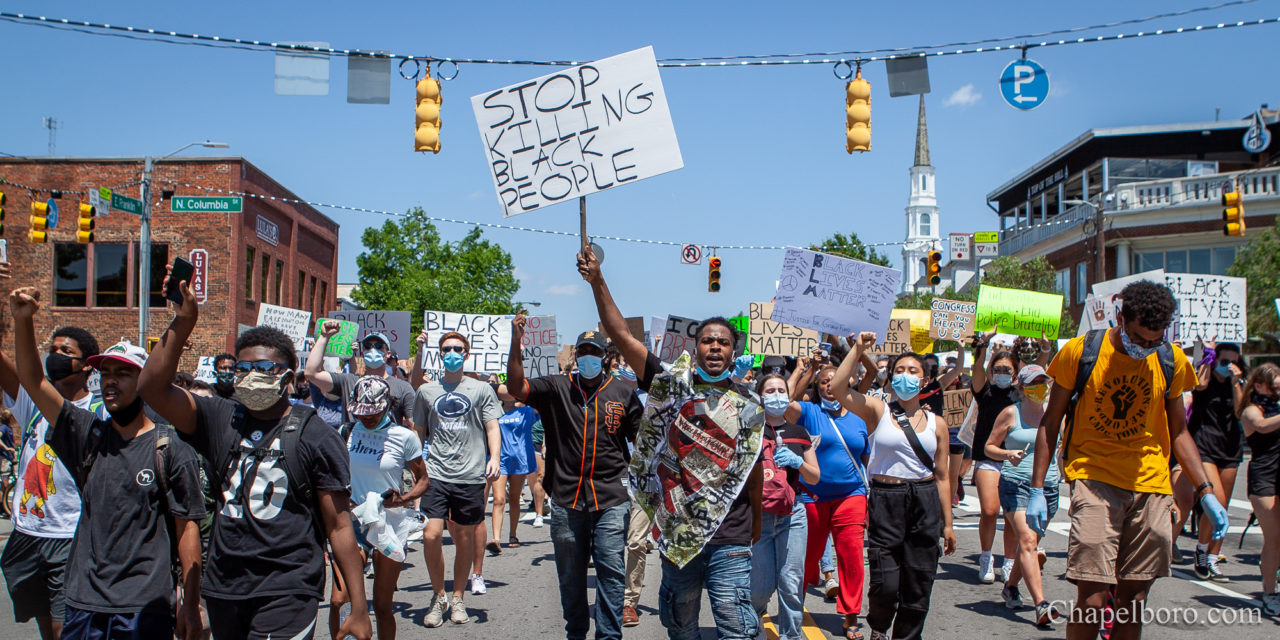 Protesters gathered in Chapel Hill on Wednesday, June 3 to protest the death of Minnesota man George Floyd, who was killed by police officers on May 25.

Below is a live blog of events from Chapel Hill as protesters took to the streets.

Following the march on Franklin Street, those in attendance gathered at McCorkle Place to share personal stories of systemic racism and poor treatment by police in the United States.

Community members have started an impromptu sharing stories of systemic racism or poor treatment by police. Personal stories and stories of others. Lots of messages about keeping this same energy for these causes beyond just today and this week. pic.twitter.com/5c3Q39cqeJ

The march around Franklin Street and UNC’s campus has ended. Organizers are handing out water bottles to those in attendance. It’s very hot outside.

The march around Chapel Hill and UNC’s campus has ended. Organizers are now handing out water bottles to those in attendance. It’s very hot outside. #GeorgeFloydProtests pic.twitter.com/k0R5JquSOV

Protesters have begun to walk and chant on Franklin Street, and are being given an escort by police officers.

Protestors continue down Franklin Steet. Police are giving them a large distance and escorting them down the road. #GeorgeFloydProtests pic.twitter.com/hCxCHvZpS8

Gerald Givens, president of the Raleigh-Apex NAACP, shared a story about how his friend was shot by police while reaching for his drivers license while in the car.

Gerald Givens, president of the Raleigh-Apex NAACP now addressing the crowd. He reminded people that his generation, born in 1970s, were the first to get all their constitutional rights.
"This has been going on for too long," he says. pic.twitter.com/qb9ZVD8xv4

Tai Hunyh of the Chapel Hill Town Council now speaking to the crowd.
"We're in the midst of a global pandemic and yet it still not managed to put a dent in the systems of oppression in our country. We're figuring two viruses: COVID-19 and institutional racism." pic.twitter.com/zJMWWN2iDZ

Rise Rasheed is the first person to speak for the crowd and his performance is met with a large amount of applause.

The first performance for the crowd is met with a large amount of applause. The amount of people gathered continues to grow. #GeorgeFloydProtests pic.twitter.com/KBUmX7gqsO

Protesters have begun to gather at McCorkle Place in Chapel Hill. Several speakers are scheduled to appear, including Chapel Hill Town Council members.

Things are getting started here on East Franklin Street as people have gathered to protest racial injustice and police brutality. A speaker has begun welcoming demomstators, with more speakers to come. pic.twitter.com/AUjwyd6ujq