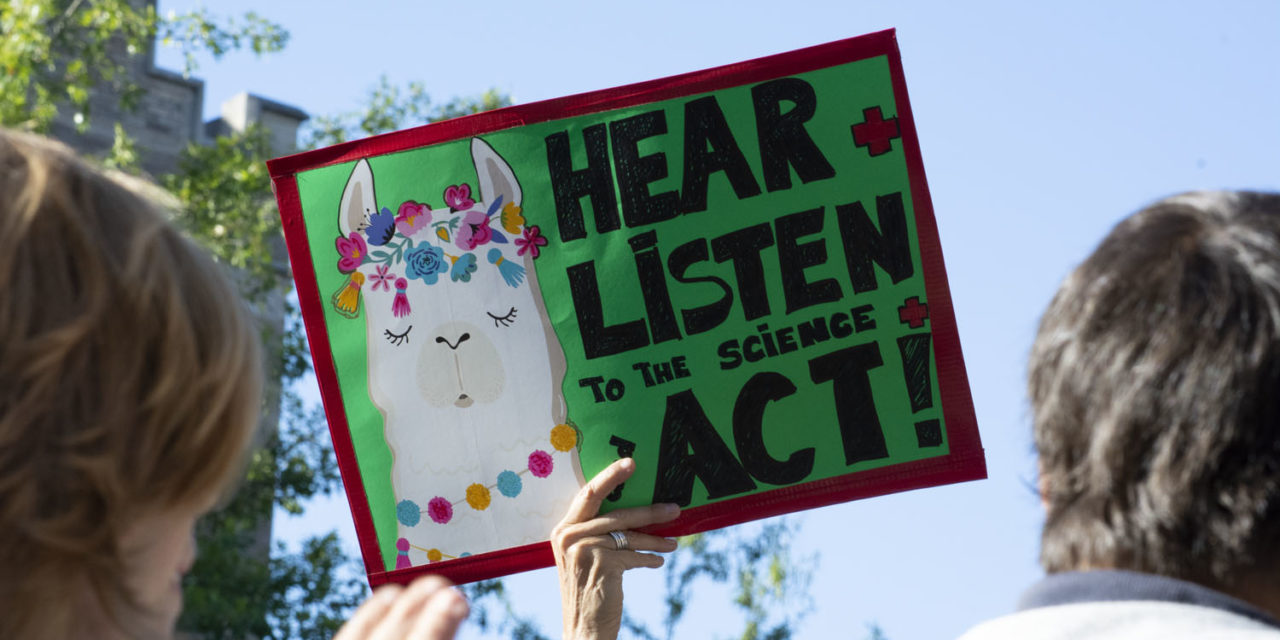 Ember Penny, also 16 years old, was the main speaker at the rally on Friday morning.

“I believe that Chapel Hill is a great place to have a climate strike just because there’s so many environmentally friendly people in the area,” Penny said. “It was just a great turnout today, and we really want to get the Chapel Hill Town Council to support a city-wide Green New Deal that’s kind of the whole purpose behind this strike.”

Chapel Hill’s climate strike was just one of thousands that took place across the world on Friday. Thunberg has been the heart of the global movement and organized the strike movement in 2018.

Penny said she was pleased with the turnout from the Chapel Hill area.

“When I first registered the strike a couple of months ago,” she said, “I really thought no more than 30 people were going to show up, because it’s just a very local piece of action, but so many people have shown up, and I’m so excited that this has happened.”

Among the speakers at the rally was Jason West, a professor in the UNC Gillings School of Public Health who studies air pollution and climate change.

“If we don’t address climate change, my sons will likely see within their lifetime a change of global temperature within five to 10 degrees,” West said. “North Carolina will have the climate that Florida currently has. Ninety-seven percent of scientists agree that humans have a dominant influence in changes in climate that we see.”

West said he was alarmed at what climate change would mean for the planet and its people, saying it affects “our livelihood, our economy, our security [and] our health.”

“They’ve been having their own protests and activities at school and making signs,” Shull said, “talking about the environment with their classmates and then they all heard about the climate change march and they decided it was important for them to go.

“So the kids themselves wrote a letter to the teachers and said we really think this is important and we’d like to go.”

Penny said she was encouraged by the younger students attending the rally and that education on climate change needs to begin at a young age.

“I really hope they got a lot out of this experience,” Penny said. “We really need to start educating our youth about climate change at a younger age, and I know that this can be a very impactful event for them, seeing just how much the community cares about climate change.”

The students from Carolina Friends School said that they would continue to work toward a change, even volunteering to organize a trash pick-up themselves.

“We could walk and bike more place,” one student said when asked about methods to prevent climate change. “Or we could just use more electric cars if you can afford it.”

Even though Friday’s protest attracted many residents and students, Penny said there was still so much people could do to prevent climate change.

“There’s a [Chapel Hill] Town Council meeting on the twenty-fifth of September that you can come out to support the resolution. In general, coming out to events like these, supporting the youth is a really great thing.”