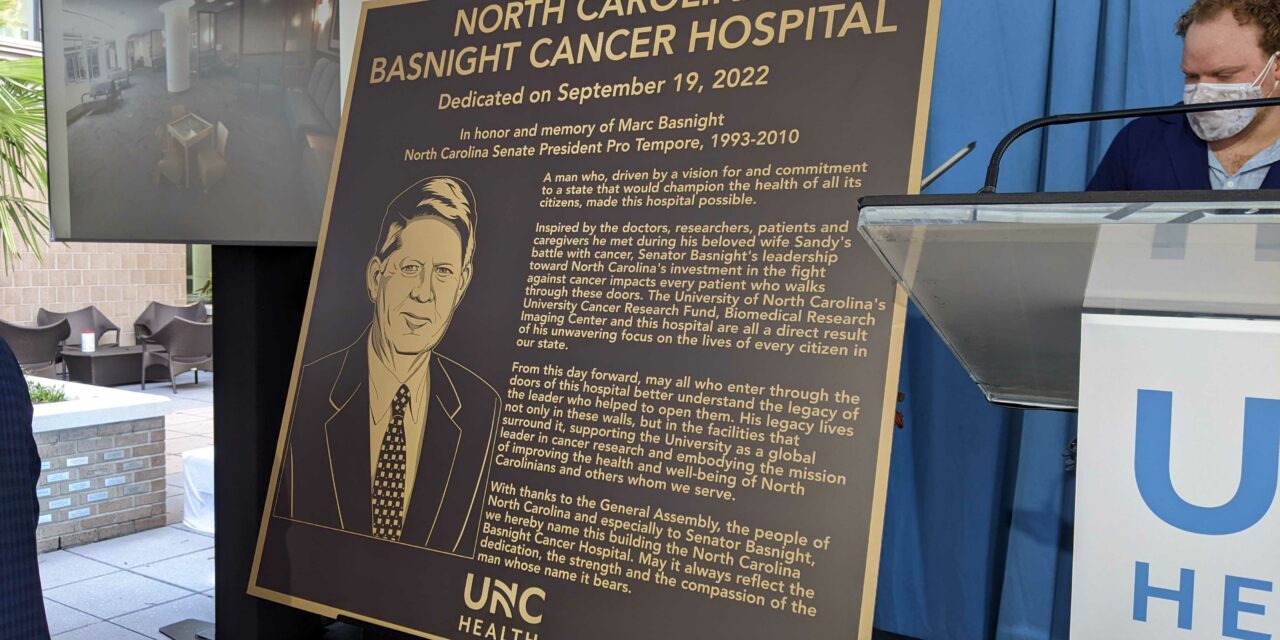 Marc Basnight was North Carolina’s longest-serving legislative leader. After his death, state legislatures wanted to find a way to honor him. They delivered on that promise — renaming North Carolina Basnight Cancer Hospitals in his memoriam in a ceremony on Monday.

Basnight was a Democrat from Manteo, North Carolina.

After his wife Sandy was diagnosed with leukemia, Basnight saw the need for enhanced research capabilities, more advanced technologies and equipment and better healthcare facilities to help fight the state’s deadliest disease, according to a press release from UNC Health.

The release added residents from North Carolina and beyond make more than 270,000 outpatient visits each year to the cancer hospital, the clinical home for UNC Lineberger Comprehensive Cancer Center and its affiliated clinics.

The UNC Cancer Hospital was opened in 2009 and is a part of the Chapel Hill medical campus.

The release said Basnight was instrumental in the opening of the hospital, drawing inspiration from doctors, researchers, patients and caregivers he met during his wife Sandy’s battle with bone marrow cancer.

Former UNC System President Erskine Bowles was the first chair of the Cancer Research Fund Committee, which oversees the University Cancer Research Fund. He said having the Basnight name attached to the UNC Cancer Hospital reflects Basnight’s dedication to the state, as well as his family’s personal journey with the disease.

“His focus was always on, ‘How will it improve the lives of the little guy?’” Bowles said.

Bowles added Basnight believed every North Carolinian deserved excellent access to healthcare, and his personal connection to cancer led him to advocate for increased state funding to combat the disease.

“This disease broke his heart,” Bowles said. “But it also opened his eyes to the need to find a cure for this cancer and other cancers that have devastated the lives of so many North Carolinians.”

As a tribute to the legacy of the late #MarcBasnight, the former state senate president pro tempore, the NC Cancer Hospital building was officially renamed the "North Carolina Basnight Cancer Hospital" in a ceremony Monday at UNC Hospitals in Chapel Hill. #UNC #OneUNCHealth @UNC pic.twitter.com/WlBCsUQH4w

Peter Hans, the president of the University of North Carolina system, said Basnight was a humble man with only a high school degree, though that didn’t stop him from influencing change in higher education.

“One of the most important things that Marc understood about higher education is that we serve as the state’s emergency toolkit — the place where policy-makers, business leaders and ordinary citizens turn when they face tough challenges,” Hans said. “And that’s what brought Mark and his wife Sandy to Chapel Hill when she was diagnosed with cancer.”

Hans added Basnight believed the most advanced science and the most experienced researchers and physicians could be found in Chapel Hill, which strongly influenced his decision to move to the area.

“We owe him for making sure that public higher education in North Carolina remained a true public good — always benefitting from bipartisan goodwill.” Hans said. “He didn’t just commit his life to North Carolina — he committed others to do the same.”

Governor Roy Cooper also spoke at the ceremony and said Basnight had an extensive list of accomplishments during his 26 years in the North Carolina Senate.

“There are two kinds of people who run for elected office. Those who want to be something and those who want to do something. Some are a little of both. Not Marc Basnight,” Cooper said. “He knew who he was and what he wanted to continue to be when he got elected — a humble, smart, caring, real person.”

Cooper said Basnight’s painful loss of his wife to cancer ultimately led to the center being founded.

“He met many real people — North Carolina families that were fighting cancer, and he wanted to help them,” Cooper said. “And he did. This place is an important part of his sweeping legacy, and it is so fitting it should carry his name.”

North Carolina Senate Leader Phil Berger said Basnight always prioritized what was best for the state, and his legacy will continue to remain for years after his death.

Bill Roper, the CEO of UNC Health at the time the cancer hospital was built, said Basnight’s vision and leadership led him to be an instrumental part of the creation of the North Carolina Cancer Hospital and the recurring University Cancer Research Fund and Biomedical Research Imaging Center.

“Senator Basnight’s primary goal throughout these efforts was to improve cancer treatment and access to that treatment for the people of North Carolina,” Roper said.

Roper added in 2009, Basnight led the push to fund the construction of the largest medical research building on UNC’s campus — Marsico Hall.