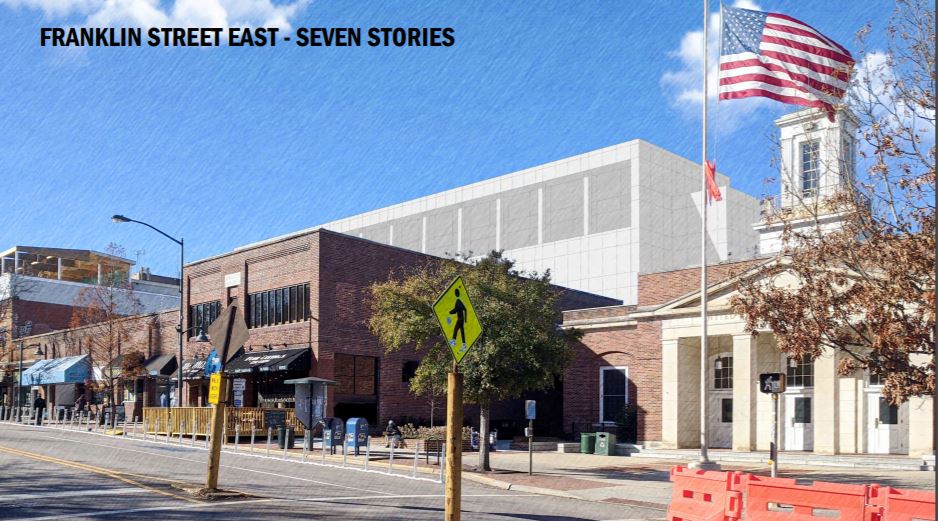 At their meeting earlier this month, the Chapel Hill Town Council received an update and presentation on the long-awaited East Rosemary Street development.

In September 2020, the Town of Chapel Hill entered an agreement with Grubb Properties to construct a new parking deck, office building and green space along East Rosemary Street.

During its January 13 meeting, the Chapel Hill Town Council received a rough, initial sketch of the project to provide feedback. This meeting gave council members time to ask questions and provide comments to help Grubb Properties move forward in the design process.

The project includes demolition of the existing 309-space Wallace parking deck and construction of approximately 250,000 square feet of office and lab space. The building is proposed to be six to eight stories tall with up to two levels of parking structure at or below street grade.

“We’re very excited about bringing more jobs downtown,” Hemminger said. “Specifically, we’re looking at the life science kinds of jobs. This building is proposed to have a lot wet lab [space] in it. We want this building to offer some public amenities as well – we’re looking at the town green space there that would be accessible to folks. So, we were looking at some renderings – it’s just in the concept idea plan right now as far as how large it would be, what types of things it would incorporate and what materials it would use.”

Currently, the project proposes to demolish the existing “CVS” parking deck and construct a new, six to eight-story parking deck with 1,000 to 1,100 parking spots. The deck will include a “retail porch” along the Rosemary Street frontage to provide space for small businesses and vendors. A community green space is also proposed at the southwest corner of East Rosemary and Henderson Streets.

If developed at its full, proposed height of eight stories, the Grubb Properties project would be the tallest building on East Rosemary and East Franklin streets. 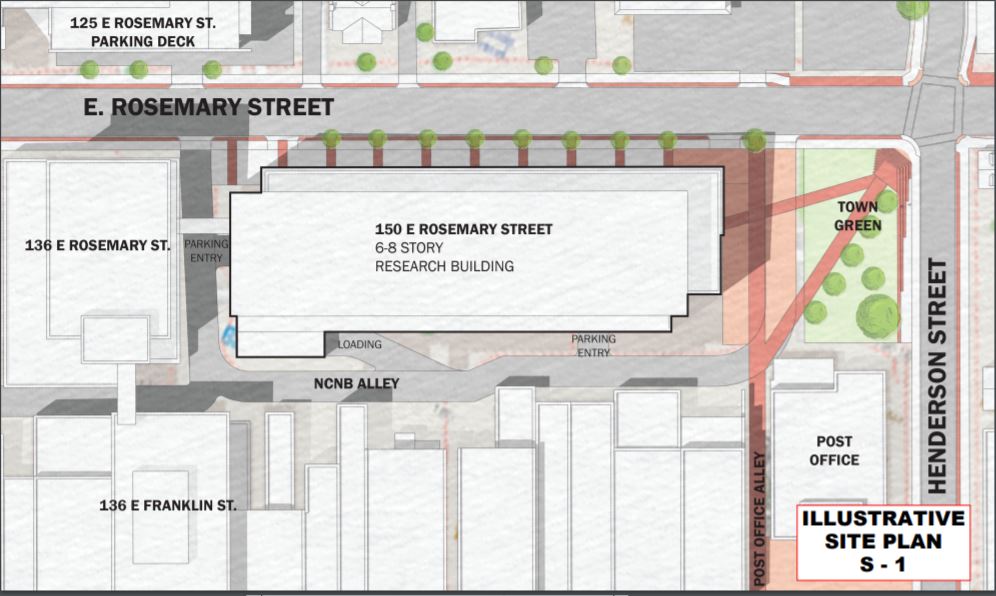 After the presentation from the building applicant, town council members raised some concerns – most prominently regarding the height of the building.

Town Council Member Michael Parker said he prefers the complex to be six or seven stories, however he is more worried about the designs of the development over height.

“I’m not someone who believes in strict numbers of heights and I think good design can make tall look very comfortable and bad design can make short look awful,” Parker said. “I think a lot is really going to depend on how you design the building rather than just whether it’s six or seven stories.”

Council Member Hongbin Gu also expressed concerns over excessive building height, but said she would wait to pass judgement until the town received a more detailed design of how the development would look.

“If we are going to propose higher or taller buildings, I’m hoping that we can give the people of the town a more detailed rendition of what the true experience is going to be,” Gu said. “I think it’s almost unfair that you’re asking people to imagine those white blocks are actually something beautiful.”

Concept art for the 150 East Rosemary Development, with one of several styling options presented to Chapel Hill’s Town Council. (Photo via Perkins Eastman.)

Beyond the discussion on building height, town council members also called for a more visible entryway on Rosemary Street for pedestrian access to the building, several pleas to save the large magnolia tree at the corner of East Rosemary and Henderson streets and multiple requests to design the structure within the historic context of surrounding buildings, including the post office.

Click here to learn more about the East Rosemary Street development and the town council’s most recent comments.