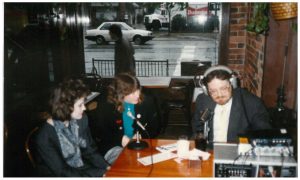 A WCHL remote broadcast from the early 1980s at Spanky’s.

Spanky’s was part of the Chapel Hill Restaurant Group, whose owners announced the decision to retire the restaurant late last week. Part owner and marketing director Greg Overbeck said Spanky’s sales have been declining steadily in recent years, partly because of the large number of restaurants on Franklin Street and the problems and reputation with a lack of parking.

“It’s a very challenging atmosphere, and what we’ve found is we’re kind of serving the same menu that a lot of restaurants up and down Franklin Street are serving. So, it’s just time for a unique concept; we need to do something different there; we need to offer stuff there that’s not being offered all over Franklin Street,” said Overbeck. “So, we’re going to say goodbye, retire Spanky’s.”

Overbeck, who started as a bus boy at Spanky’s in 1977, said that he did not want to reveal too much yet about the new restaurant, but that it is planned to reopen sometime in April.

“I can tell you one thing, it’s going to be very affordable,” said Overbeck. “I think this new concept will not only be attractive to business people uptown and families, but to students from Carolina as well.”

Additionally, the downstairs will have a “new look” to it, including the likely removal of the well-known caricatures of Chapel Hill legends that line the walls of Spanky’s – something that has gotten concern from Chapel residents online.

“We love the caricatures, but we want to take a break from the old Spanky’s. We want to make a clean break,” Overbeck said.

Overbeck started putting the caricatures on the walls around 20 years ago with former Spanky’s employee and artist of the caricatures, Dave Washburn.

“I’ve already been approached by a couple of different organizations asking if we’d be willing to donate those or some of them for an auction to raise money, and I really like that idea,” said Overbeck.

Overbeck said he wants to say a sincere and humble thank you to all the folks that have supported Spanky’s over the years.