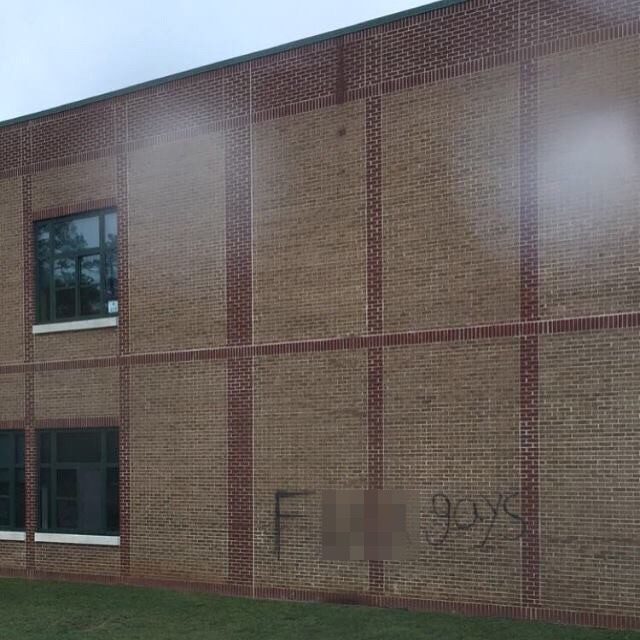 The spray painting occurred just hours before students in the Queer-Straight Alliance at East Chapel Hill High were scheduled to meet up to carpool to the NC Pride Parade in Durham.

A report from Chapel Hill Police documents the spray painting but does not detail the vandalism.

E-mails between East Chapel Hill Principal Eileen Tully and Linnea Van Manen, who is a junior at East Chapel Hill and president of the Queer-Straight Alliance club, have been provided to WCHL.

In the correspondence, Van Manen said that she came to school on the following Monday expecting the school to address “the hate our club had faced on our way to the pride parade,” but no administrators addressed the situation.

Tully responded that she did not address the student body because she was not aware that the QSA was meeting to carpool on Saturday, and, therefore, she “had no idea that there was a connection and thought that the graffiti was a random act of ignorance and hatred and not one directed toward East students.”

Tully added that she is “terrifically sorry and incredibly saddened and upset by the graffiti painted on the building.”

Tully went on to say that she would be seeking counsel from the district for appropriate actions and response.

Tully also agreed to attend a meeting with the QSA club at East Chapel Hill, on Tuesday of the following week, to discuss the incident. Van Manen tells WCHL that during that meeting Tully had several suggestions for how to handle the situation.

“She gave a variety of suggestions on things that could be done,” Van Manen says. “Among which were an announcement to the school expressing that the school system would not tolerate hateful things like that happening and also that she would bring it up at the faculty meeting.”

Van Manen adds Tully also suggested sending out an automated message to student’s parents, “to allow for students to talk with their families about it. And her words were to talk about it ‘around the dinner table.’”

But Van Manen says the club advisor told her that the incident was not discussed during the faculty meeting and that, as of Friday evening, an automated message still had not been sent to parents.

Van Manen says she would like to see Tully make a strong statement on the incident.

Van Manen adds, during all of this, students and teachers have rallied around the QSA to show them support.

“[Students] were coming up to me and saying very supportive things and expressing condolences,” she says. “As well as, teachers began putting flyers up in their room stating that their rooms were safe spaces for all gay, lesbian, bisexual and transgender students and their allies.”

Van Manen says she is proud of the way the group continued on with the plans to march in the pride parade in Durham after seeing the derogatory spray paint earlier in the day.

Tully turned down WCHL’s request to speak about the incident and the reaction from the school.

This is not the first time East Chapel Hill has been in a negative spotlight in recent months.

In May, emotions were high after students at East Chapel Hill took a photo holding Confederate flags while on a class field trip. The picture was posted to Instagram with the caption “South will rise.”