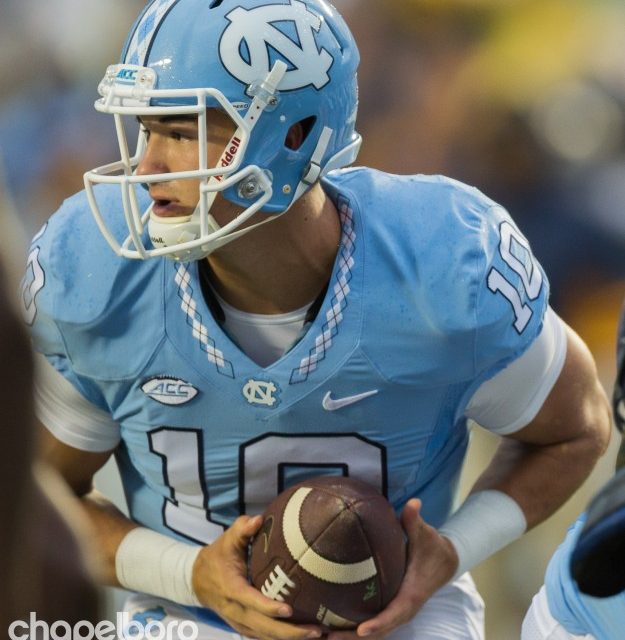 The argyle look. Do we like it in football?

Until the last few years, argyle was synonymous with Carolina Basketball because Chapel Hill native and fashion designer Alexander Julian made it part of Tar Heel hoops when he redesigned their uniforms back in 1992. Current assistant coach Hubert Davis, then a shooting star for UNC, modeled the new unies in a press conference attended by some national media.

Carolina’s old flair-bottom warm-ups had become passé and Dean Smith wanted to put his program’s look back on the cutting edge, like the blue converse sneakers and v-neck jerseys the Tar Heels sported in the 1970s. So he let Julian go to work in his studio, and the most distinctive element on the new uniforms was the famed argyle stripe down the sides of the shorts and the shirts.

A few years ago, the argyle found its way onto other UNC designs and the end zones in Kenan Stadium, like last Saturday night, were painted argyle for at least one game a season. But with all the hoopla about Larry Fedora changing his team’s colors from traditional Carolina blue and white to Navy and sometimes black with chrome helmets, the last place we expected the argyle to show up was on the football pants, jerseys and the headgear.

While Fedora went back to the light blue jerseys and white pants that the old guard seemed to favor over his attempts to make the team look hipper and tougher, and with NIKE attempting to reign in the so-called Carolina brand, with definite looks to the logos, the argyle became part of that tradition that the fans and alumni wanted. Whether the high school kids like the argyle piping down the football pants, around the neckline and on the strip atop the helmets, those results aren’t in yet.

But the compromise is kind of cool. At first glance, or from the upper deck of the stadium, the Tar Heel unies look very much like they have all the way back to the 1960s. Carolina blue jerseys and white britches. But down close, and definitely on television, you notice something more. And when the cameras zoom in on the players, my gosh, it’s the same argyle stripe that has adorned the basketball uniforms now going on 25 years.

And if the Heels score say 50 points, like they did against North Carolina A&T, that’s a lot of argyle in the end zones! Whoever decided to do it that way, it works and satisfies all parties. The colors are back to where they belong but the design is both different and unique. While college teams like to play off what other teams are wearing, no one is EVER going with the argyle that Julian made a Tar Heel trademark. It’s clearly Carolina’s and only Carolina’s.