Two weeks of samples taken from Pittsboro’s water intake show decreasing concentrations of 1,4-Dioxane in the town’s drinking supply since a yet unknown Greensboro source discharged at least two “slugs” of the dangerous chemical into the Haw last month.

The latest round of data indicate 1,4-Dioxane — a suspected carcinogen derived from industrial runoff — has been diluted to levels beneath the Environmental Protection Agency’s standard of maximally acceptable concentrations for potable water.

On July 14, the most recent sample date as of press time Tuesday, Pittsboro’s finished water contained 17.3 parts per billion of 1,4-Dioxane at the Horton water tank, 16.2 ppb at the 1.0M water tank and fewer than 3 ppb elsewhere. The EPA recommends no more than 35 ppb in healthy drinking water based on a one in 10,000 chance of cancer over lifetime exposure.

“As expected, as we become further removed from the contamination event, we are seeing levels steadily decrease closer to non-detect, <1.0 (ppb),” Town Manager Chris Kennedy said in a statement. “Despite the improvements, town staff will continue to monitor and sample the water until we achieve consistent non-detect results.” 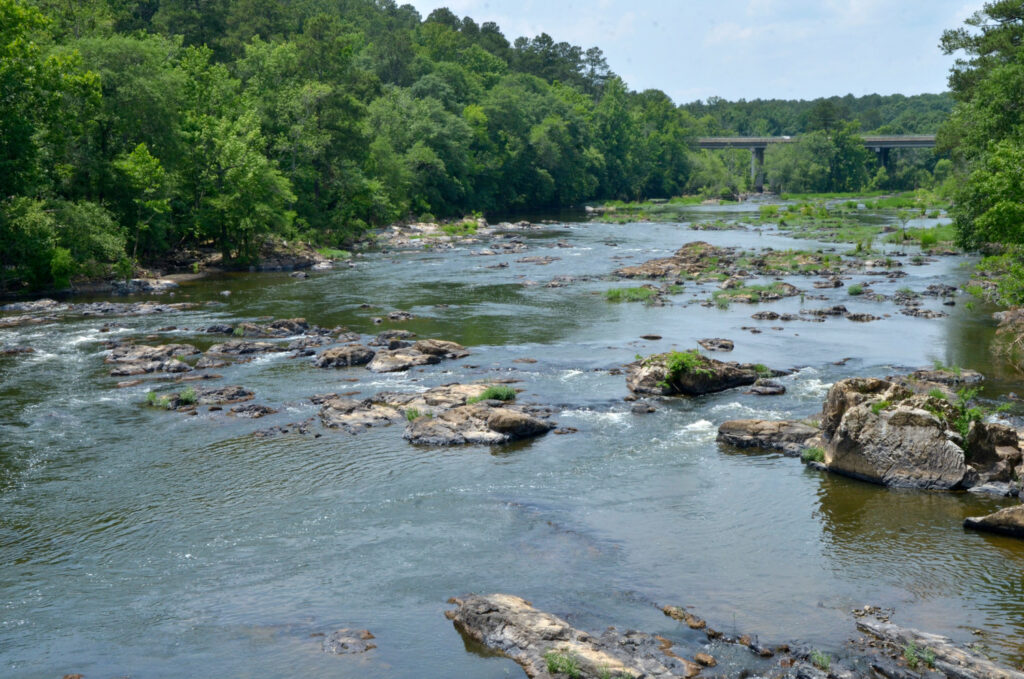 The Haw River, which flows through Pittsboro and supplies the town with its drinking water, is ‘one of the most impacted’ waterways in terms of unregulated chemicals in the Cape Fear Basin, according to Detlef Knappe, S. James Ellen Distinguished Professor of Civil, Construction and Environmental Engineering at N.C. State.

On July 1, the City of Greensboro and the North Carolina Dept. of Environmental Quality reported an illegal discharge of 1,4-Dioxane into South Buffalo Creek — a Haw River tributary — in effluent from Greensboro’s TZ Osborne Wastewater Treatment Plant. Preliminary samples in Greensboro indicated levels between 543 ppb and 687 ppb, almost 20 times greater than what the EPA’s guideline permits. The chemical had not previously appeared in Pittsboro’s water at any detectable level for more than a year.

In the immediate wake of Greensboro’s contamination, 1,4-Dioxane levels at Pittsboro’s raw water intake were non-detectable. Two days later a raw water sample included 76.5 ppb, and later samples showed 38.2 ppb and 43.7 ppb over the next few days. Finished water at Pittsboro’s water tanks contained much lower concentrations of 1,4-Dioxane, none higher than 5.56 ppb.

A week later, however, 1,4-Dioxane levels spiked again. Pittsboro representatives have publicly inferred there was at least a second illegal discharge of 1,4-Dioxane in Greensboro, though no such incident was formally reported.

“Town staff believes that these numbers indicate a delayed or secondary influx of 1,4-Dioxane reaching the Pittsboro raw water intake with what appears to be an additional slug of contamination coming from Greensboro on or immediately before July 6, 2021 …” Kennedy said last week.

Upon seeing the test results, town staff flushed the Chatham Forest tank and refilled it with what they “expect(ed) to be less contaminated finished water” as concentrations trended down.

“From a strategic perspective, the town is continually turning over the stored water in our water tanks more frequently than usual,” Kennedy said in a release, “to continually refresh the water with improved and better quality finished water so that 1,4-Dioxane contaminated water exits our public supply as quickly as possible.”

As of press time, the Greensboro party responsible for discharging dangerous levels of 1,4-Dioxane was still unidentified. The City of Greensboro is obligated to limit 1,4-Dioxane discharge per a Special Order of Consent between the city and the North Carolina Dept. of Environmental Quality signed in February. The SOC stipulates no more than 45 ppb of 1,4-Dioxane may be released into the Haw per day.

The agreement was triggered in 2019 after the discovery that Shamrock Environmental — an environmental and industrial waste management services company — was dumping 705 parts per billion to 1,210 parts per billion of 1,4-Dioxane at the TZ Osborne plant. The Shamrock location in Greensboro is a tanker cleaning facility that also manages wastewater and recycles drilling mud.

Water samples of Shamrock’s effluent showed 98.8 ppb of 1,4-Dioxane on July 6 and July 7 and 466 ppb on July 7 in a “flume grab” — water which had not been mixed with other sources at the wastewater treatment pant. But Greensboro representatives have denied any connection between the company and last month’s spill.

Alternative sources had not been presented as of press time.

“So that’s what Greensboro is working on,” Pickett, Pittsboro’s water superintendent, previously told the N+R, “trying to figure out where this source is coming from all of a sudden. And we’re working with Greensboro, as well, so hopefully we can get this knocked down pretty quick.”

Pittsboro representatives, including Kennedy and elected officials, have said they will demand explanation and compensation from Greensboro for its violation of the SOC and negligence in protecting downstream neighbors from the city’s dangerous effluent.

The town’s board of commissioners hosted a special session at 5:30 p.m. on Tuesday — immediately after press time for this edition of the News + Record — to “discuss the town’s understanding of the issue to date and the town’s response moving forward,” Kennedy said in the meeting announcement. The meeting was held virtually via Zoom.