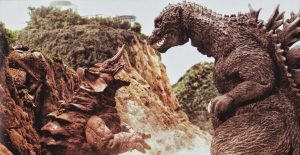 With Kong: Skull Island stomping around theaters, many a filmgoer, myself included, is itching for some more giant monster action. Whether they use rubber suits and miniature cities or state of the art CGI, here are five movies guaranteed to scratch that skyscraper-sized itch. 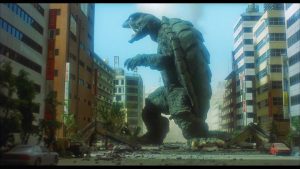 Imagine a giant turtle. Now give that turtle tusks, let it walk on its hind legs, and give it the ability to fly by shooting fire out of its shell like a jet. That awesome image in your head is Gamera, a Japanese monster created in 1965 for the explicit purpose of becoming more popular than Godzilla. While he has never quite managed to achieve that goal, Gamera has starred in a whopping twelve movies. The best of them: Gamera: Guardian of the Universe.

Released in 1995, the plot of the film is simplicity itself: humanity is being threatened by a group of enormous, laser spitting bats called Gyaos. Gamera doesn’t like humanity being threatened and especially doesn’t like bats. From there, the film gives of a series of escalating, expertly crafted monster fights featuring stellar practical effects, incredible monster suits, and a cast of likeable but disposable humans to look on in awe.

Give it a watch and remember: if you like it there’s eleven more movies where that came from. 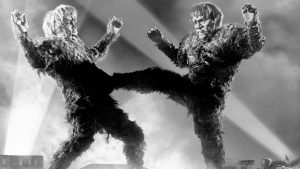 What’s better than one building-sized ape-man stomping through a city? The War of the Gargantuas answer to that question is simple: two of them. Released in 1966 and featuring state-of-the-art special effects and model work, the film follows a group of soldiers and scientist as they attempt to stop the rampage of two massive monsters. They eventually learn that one of the monsters is good and the other enjoys eating people. The two monsters come to blows and bring Tokyo down as they battle it out.

There’s a lot to recommend about The War of the Gargantuas. Because the monsters are smaller than in most Japanese monster films, the model city is larger and more detailed than usual and it all looks amazing getting crushed by monkey people. There’s also a scene featuring a giant octopus attacking a ship that’s totally unrelated to plot, but still pretty amazing. Finally, character actor Russ Tamblyn turns in the single most bored performance I have ever seen as an American scientist studying the monsters. His absolute refusal to put any effort into any single line is both impressive and hilarious.

If you’re looking for some old-school Japanese monster mayhem, The War of the Gargantuas has you covered. 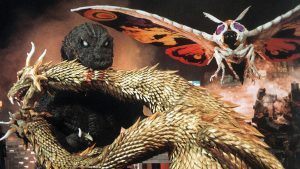 The title says it all: this 2001 film features the king of monsters himself, Godzilla, joining two of his most popular foes in glorious, over-the-top combat. The 26th film to feature Godzilla, GMAOA eschews the “savior of humanity” angle used for the lizard many a time, and instead casts him as an out-and out villain. Instead Mothra and King Ghidorah fill out the protagonist role. Mothra, as her name implies, is a massive moth that fights for the good of the earth. King Ghidorah is a golden, three-headed dragon who really enjoys killing Godzilla. Together, they must fight what might be the most absurdly over-powered version of Godzilla ever put to screen.

GMAOA is non-stop highlights, from the incredible effects, to the stellar characterization of the titular monsters, to a cameo from my personal favorite underused monster, Barugon (basically a giant lizard with a horn on his head). This is the pinnacle of Godzilla films, and that is not a position to take lightly.

Watch Godzilla, Mothra, and King Ghidorah: Giant Monster All-Out Attack, for the most fun you’ll ever have with the king of monsters. 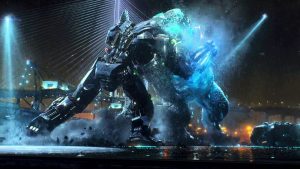 How do you improve a movie that already has a multitude of massive monsters tearing up cities using state of the art CGI? You make those monster fight giant robots. This is the premise of Pacific Rim, a love letter from visionary director Guillermo del Toro to monster fans across the world. The film opens with humanity losing a war against wave after wave of monster coming from beneath the Pacific Ocean. To fight back, humanity creates giant robots called “Jaegers” to punch the monsters into submission.

What follows is over two hours of the coolest monster or robot action ever out to film, all bolstered by a series of off-beat performances from the likes of Ron Perlman, Idris Elba, and Charlie Day. Pacific Rim plays like the movie every thirteen-year-old wishes they could make: full of color, action, fun, and slicing up pterodactyl monsters in space using robot swords.

Let your inner child out and give Pacific Rim a watch. 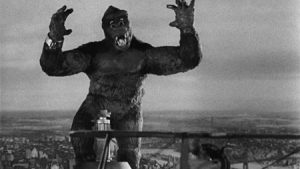 The original monster movie and an unassailable classic, King Kong is just as great today as it was when it premiered in 1933. The plot has become legend: a film crew voyages to an uncharted island to shoot a movie and run afoul of the islands carnivorous inhabitants, including the titular giant ape. They eventually capture Kong and transport him back to New York where he escapes and goes on a rampage culminating in the famous set piece atop the Empire State Building.

What sticks out about King Kong after all these years is just how well it functions both as a monster movie and an adventure movie. Kong and the human’s various run-ins with dinosaurs and monsters are thrilling and awe-inspiring, the effects work is still top of the line, and the finale remains the most effective endings to any monster movie. King Kong paved the way for countless monster films to follow and captured the imaginations of generation after generation of moviegoers. It is the greatest giant monster movie of all time.