Over Half of Chatham Wells Show High Levels of Contaminants

More than half of the 242 wells tested in Chatham County contained levels of Chromium-6 and Vanadium, according to a joint study conducted by UNC-Chapel Hill and Virginia Tech. Between 10 and 20 percent of wells tested also contained high levels of lead and copper. 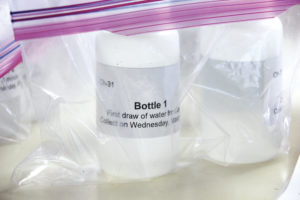 Residents who volunteered to participate in the well water study were provided sampling bottles and instructions on collection.

The study found that 51 percent of the wells tested had levels of Chromium-6 that were above N.C. Health Goal standards. Chromium-6 is a cancer causing chemical that can be naturally occurring or can be produced through industry. The study also found that 84 percent of the wells contained high levels of Vanadium, a metal and an element on the periodic table. Vanadium occurs naturally in the earth’s crust and is also used for industrial purposes. The International Agency for Research on Cancer (IARC) has determined that vanadium is possibly carcinogenic to humans. 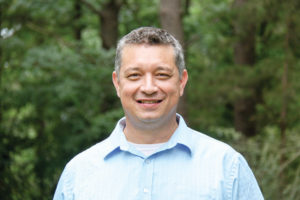 “We can do a much more thorough study with the public and the support of the participants who are collecting the data,” George said. “We originally wanted 40 samples and we received 242, far more than we could have collected on our own in that time frame.”

“[Citizen science] builds a sense of ownership for the participants, especially in Chatham County,” he said. “There is a huge reservoir of local knowledge in the community that helps us as well.”

After collection, the samples were tested in labs at Virginia Tech’s Department of Civil & Environmental Engineering. Those results were sent to the individual well owners, whose identities and locations will remain confidential. Upon receipt of the raw data, George and Kelsey Pieper, a Research Scientist at Virginia Tech, said they were “eager to share our results” to Chatham County residents to help them better understand what could be in their well water and what can be done to improve the water quality at their home.

The pair held two separate forums last week, the first in Moncure on Monday and another at CCCC’s Pittsboro Campus on Tuesday, to share the results to packed rooms of interested residents. Many of the residents were interested in learning where the concentrations of elevated contamination were located or if potential sources were identified. However, the researchers noted that their teams have not yet completed a geographic analysis of the results, stating that because of the levels of containments, the pair wanted to inform the residents of their findings and provide information on potential filtering solutions as soon as possible.

“The fact that we found so much Chromium and Vanadium, no matter where it came from, we felt we needed to [hold the forum],” George said. “We can’t wait around until we get the full picture. We need to let people know what they are begin exposed to in their own wells.”

“We also found a lot of premise plumbing metals, lead and copper,” he continued. “Generally we know that comes from plumbing and we wanted to report that.” 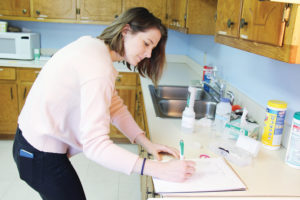 “Maybe it’s from old dumps, maybe it’s industrial, maybe it’s naturally occurring, maybe its from all three,” George said. “The first thought is ‘am I harming my family?’ We wanted to raise awareness of the presence of these metals so people can take the first step.”

George notes that filters works well on most of these metals and containments, whether they are a kitchen sink filter or a whole house filter. During the forum, George and Pieper outlined different filters that have proved, through testing, successful in reducing the metal levels. Reverse osmosis systems, which are whole house systems, will remove everything that the pair tested. For other filter systems, such as pitcher filters or sink filters, they said that residents should seek those that are certified NSF-53, a certification from NSF International which is recognized by regulatory agencies at the local, state, federal and international level that a product complies with all standard requirements.

The pair also urged that well owners have their water tested regularly. The N.C. Dept. of Health and Human Services suggests annually for bacteria, every other years for inorganic materials such as metal, and every five years for pesticides and volatile organic compounds.