My relationship with North Carolina goes back to Dec. 13, 1966, when I covered the Tar Heels’ 64-55 victory over Kentucky in Lexington’s Memorial Coliseum. At that time, the young Carolina coach Dean Smith wasn’t far removed from the days when he was being hung in effigy on the Chapel Hill campus. I wrote a game story that complimented Carolina’s execution of Smith’s ball-control game plan – a “Picasso,” I called it – and Smith never forgot it.

Over the next 30 years, whenever he and I crossed paths, Smith mentioned that 1966 story. He said it came when he needed a pat on the back. He had been under fire in Chapel Hill for not being the popular Frank McGuire, who had coached the 1956-57 Heels to a 32-0 record and an historic triple-overtime win over Kansas and Wilt Chamberlain in the NCAA title game. 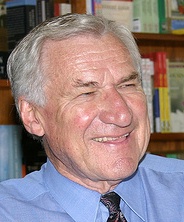 Using the victory over UK as an early-season impetus, the Tar Heels went on to earn Smith a berth in the 1967 Final Four in Louisville’s Freedom Hall. I was assigned to cover the team’s arrival at Standiford Field. When the players disembarked, waving small Confederate flags, nobody thought it amounted to any more than regional pride. (Nevertheless, Dean didn’t like it when I mentioned it years later.)

Dayton upset the Tar Heels in the 1967 semifinals, sparing UNC the agony of playing Lew Alcindor’s unbeaten UCLA team, but Smith had turned the corner. Over the next 30 years, he made 26 more NCAA trips, won two national titles (1982 and 1993) and essentially built a new model for college basketball programs.

Under Smith, no player – even one as gifted as Michael Jordan – was bigger than the system. He emphasized academics, building an outstanding graduation rate, and was committed to compliance with the NCAA. He introduced the “Four Corners” delay game that eventually forced the NCAA to adopt a shot clock. No detail was too small to escape his micro-management.

Whenever I’d get into an argument about cheating, I’d always cite North Carolina as Exhibit A of a highly successful program that did things the right way. My list also included Duke, Stanford, Wisconsin, Notre Dame, Louisville, Indiana, Michigan State and a few others. But North Carolina was the rock. Whenever a radio caller would insist that everybody cheats, North Carolina was my go-to program for proof that he (or she) was wrong.

But today I’m devastated. I feel betrayed. Never in my wildest dreams could I envision the mother of all academic scandals happening at North Carolina. But the facts are as indisputable as they are mind-boggling. For almost 20 years, going back to the end of Smith’s hallowed era, the university offered a bogus course in African-American Studies that was taken by many student-athletes.

I believed in Carolina’s academic integrity so strongly that I didn’t pay much attention in 2011, when the Raleigh News & Observer began to report about widespread academic fraud at UNC. However, Rashad McCants, the second-leading scorer on Carolina’s 2005 NCAA championship team, definitely got my attention when he told ESPN’s “Outside the Lines” that tutors wrote his term papers, that he rarely went to class for about half his time in college and that he remained eligible to play largely because of phony classes.

Furthermore, McCants said Carolina coach Roy Williams knew about the bogus class system that had been in place for years, an allegation that Williams immediately and repeatedly denied. Nevertheless, UNC hired former federal prosecutor Kenneth Wainstein to conduct an independent investigation into past irregularities in academics relating to athletes.

The results of the Wainstein investigation were devastating to the university and its image. In a detailed, 131-page report, Wainstein confirmed that at least 3,100 students, many of them scholarship athletes, were guilty of academic fraud that was tacitly sanctioned by university administrators.

Sadly, but predictably, some Carolina haters engaged in schadenfreude of the worst kind. Tired of what they perceived as a holier-than-thou attitude at UNC, they took great delight in Carolina’s fall from grace. They demanded that titles be vacated, victories forfeited and monies returned. They felt the NCAA should impose Draconian sanctions against UNC that were every bit as tough as the ones levied against Penn State following the Jerry Sandusky child-abuse scandal.

They may get their wishes. Academic fraud of the kind that existed at Carolina goes to the heart of an institution’s mission and integrity. It is just about the worst scandal of its kind in NCAA history. And the fact that it happened in Chapel Hill hurts more than just the university and its athletics programs. It hurts everyone in college athletics who is fighting against corruption at all levels. This was a massive blow to everyone who believes, however naively, in the concept of the level playing field.

Carolina is hardly the first or the only school to compromise its academic standards to accommodate gifted athletes who have no business being in college. Every university has courses and majors that are conducive to keeping athletes eligible to play and make money for the university. But UNC took this distasteful reality to a new level.

As academic watchdog Gerald Gurney told CNN, “I can safely say that the scope of the 20-year UNC fraud scandal easily takes the prize for the largest and most nefarious scandal in the history of NCAA enforcement. The depth and breadth of the scheme – involving counselors, coaches, academic and athletic administrators, faculty, etc. – eclipses any previous scandal.”

I can’t help but feel badly for my old friend Dean Smith. I also grieve for all the marvelous student-athletes who have come through the Tar Heel program. Almost all of them got their degrees and became productive members of society. I remember how neat I thought it was when Jordan, who left UNC after three years, came back to get his degree.

Despite this incredible jolt, I refuse to concede that everybody in big-time college basketball is cheating. Because if I ever believed that, I would have to stop following the game at that level. After all, what would it say about the integrity of any of us if we supported an endeavor we believed was totally corrupt?

All we can do is continue to fight the good fight. We must seek out and celebrate the good guys while also weeding out and condemning the cheaters. Just because the battle is tougher now than it was before the UNC bombshell, it does not mean that it’s no longer worth fighting.