Surprising Heroes In A Long Struggle For Justice

Why does a moderate, progressive journalist write a book critical of his political idol, Terry Sanford, the late governor and senator, and make a hero of Republican U.S. Senator Thom Tillis?

It would just be an interesting question for cocktail party talk if the subject of the book were not so serious and compelling. 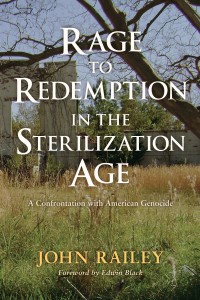 Winston-Salem Journal editorial page editor John Railey’s new book, Rage to Redemption in the Sterilization Age, combines a chronicle of a bleak period in our state’s history with a poignant personal memoir.

This combination, along with the author’s skilled writing and good story-telling talents, make for a powerful reading experience. I picked up the book after lunch one day and could not put it down.

Railey tells the story of efforts to persuade the state of North Carolina to compensate persons who had been sterilized under the authority of the state’s eugenics board.

One of those victims, Nial Cox Ramirez, became the book’s central character.

In 1965, at age 18, shortly after she gave birth to a daughter, a doctor in her hometown of Plymouth in eastern North Carolina “tied her tubes,” assuring that she would never have another child.

The eugenics board and the Washington County public welfare office authorized the surgery based on the finding that she was, among other things, “feeble-minded.”

Establishment of the eugenics board in North Carolina paralleled action by many states in the U.S., prompted by a powerful movement in the early 20th Century known as the “eugenics movement.” That movement was based on the idea that genetic features of a population could be improved by selective breeding and sterilization of people deemed to be genetically inferior.

The authority of states to adopt sterilization programs was approved by the U.S. Supreme Court in Buck v. Bell, 274 U.S. 200 (1927), in an opinion by Justice Oliver Wendell Holmes, Jr. who wrote, famously or infamously, “Three generations of imbeciles are enough.”

These ideas provided support and inspiration for the racial purification programs and genocide in Nazi Germany.

After World War II, support for the eugenics movement evaporated in the United States, and in 1974 North Carolina finally abandoned the eugenics board (then called commission) and its programs.

But the damage done to Nial Cox Ramirez lived on.

Although she made a successful professional life as a health care worker and raised her daughter, Deborah, who became an accomplished information technology specialist, she suffered greatly from the loss of her ability to have more children. The damage included the breakup of her marriage to a man who desperately wanted to have children.

In the 1970s, after Ramirez unsuccessfully sued the state of North Carolina and others in litigation sponsored by the American Civil Liberties Union, she retreated into her private world. But when Gov. Michael Easley apologized for the state’s role in the sterilizations and appointed a commission to study the matter of compensation, she was ready to join the efforts of N.C. legislator Larry Womble and the Winston-Salem Journal to push for fair compensation.

Easley and Gov. Beverly Perdue gave tacit support to their efforts, but were unable to persuade the Democratic-controlled General Assembly to act. However, when Thom Tillis became speaker of a Republican-controlled House of Representatives, he promised Railey, “If I don’t get compensation ratified this session, I’ll consider it a personal failure.”

Tillis kept his promise and the legislature finally provided Ramirez and the other victims a small measure of long-deferred compensation.

Railey warmly expresses his appreciation to Thom Tillis, even though he confesses that his political idol has been progressive Democratic Gov. Terry Sanford. Throughout the book, Railey wrestles poignantly with the possibility that Sanford, as governor, knew about the work of the eugenics board and did not act to end its activities.