Methane in the Water Part II: Fires and Explosions

Author’s Note:  This is the most technically complex column I have attempted to share with you in the 3.5 years I have been publishing Common Science.  The issue of methane contamination of water wells is important and much of the reporting on it has been incorrect, so, to me, this is an important piece.   I ask that you give it a try and email me at commonscience@chapelboro.com with any questions.

This is the conclusion of a two-part series of the implications and potential hazards of methane contamination of drinking water wells due to fracking. Part I explained how we know that fracking allows methane to infiltrate drinking water aquifers, and reviewed the associated toxicity implications. For the purposes of this week’s column, the key point to know is that a recent Duke University study demonstrated that drinking water wells near to fracking operations in New York and Pennsylvania had methane concentrations of up to 70 mg/L, a level many times greater than normal. Since methane, the primary component of natural gas, is quite flammable, the question I will address this week is what level of methane contamination in drinking water wells represents a fire or explosion hazard. 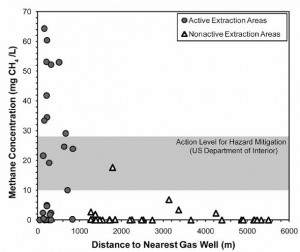 The graph above from the Duke Study shows the elevated concentrations of methane in well water near to fracking operations. Please note the gray band labeled “Action Level for Hazard Mitigation (US Department of Interior)” as I will be referring to it below.(1)

In order to evaluate the potential hazards stemming from methane contamination of water wells, we need to discuss some thermodynamics.(2) Methane is a flammable gas, but like all flammable gases, it can only burn in air at certain concentrations. If the concentration is too low, there is not enough fuel to sustain a fire. If the concentration is too high, there is not enough oxygen. (Essentially, the methane crowds out the oxygen.) For methane to burn when mixed with air, its concentration must be between 5 and 15%, which are known as the lower and upper flammability limits. Therefore, in order to avoid a methane fire or explosion, we need to avoid creating a vapor mixture with 5-15% of methane in air. This is almost always accomplished by keeping the methane concentration at less than 5%.

Now that we know what concentrations of methane-air mixtures are flammable, the next question for us is, “How much methane must be dissolved in my well water such that a flammable mixture of methane and air can be created?” To answer this question we need to discuss the vapor liquid equilibrium (VLE) for methane and water shown below. 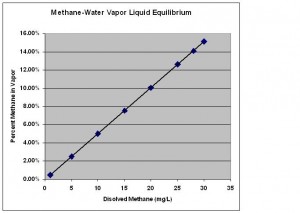 The X axis on this graph shows concentrations of methane dissolved in water in milligrams per liter (mg/L).  The Y axis shows the percent methane in the air above the liquid. The diagonal line represents the conditions when the liquid and vapor are in equilibrium with one another. I will explain what that means using the example below.

Start on the X axis and find 5 mg/L of dissolved methane. If you move straight up from there, you will hit the diagonal line at 2.5% methane in the vapor. What this means is that if I make a solution of 5 mg/L of methane in water and put it in a closed container, methane will evaporate out of the liquid until the vapor concentration reaches 2.5%. The reverse is also true. If I were to start with pure water and introduce a vapor mixture of 5% methane above it, methane from the vapor will dissolve into the water until a concentration of 5 mg/L is reached. At these conditions, the vapor and the liquid are in equilibrium which means that methane evaporates from the water at the same rate that is dissolving back in from the gas. This is what equilibrium means in this context.

Now that we know how the VLE graph works, let’s consider the data for 10 mg/L of dissolved methane, a concentration just high enough that the DOI recommends mitigation. In this case we see that a vapor concentration of 5% methane would be created in a closed container. As we discussed above, 5% is the lower flammability limit for methane. Since a 10 mg/L solution of methane in water has the potential to create a flammable vapor mixture above it, the DOI uses 10 mg/L as the lower limit for its action level range.

Consider again the example of water with 10 mg/L of dissolved methane, but this time let’s put it in an open container. In this case, methane evaporating from the water into the vapor space above can waft away. In most circumstances, it will float away at a rate faster than it can evaporate from the water. Therefore, the vapor space above the water cannot build up a concentration of 5% methane – the lower flammability limit – and thus cannot burn or explode. Additionally, over time in an open system, eventually nearly all of the methane initially dissolved in the water will be gone. 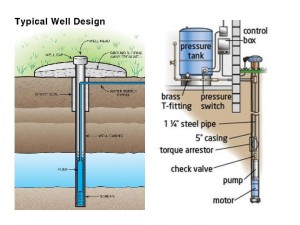 When installing a water well, you start by digging a 4-6” diameter hole into the ground until you find the water table, typically 100-500 feet in this neck of the woods. The top portion of the large hole is protected with a steel and/or concrete casing to prevent it from collapsing. At the top of the casing there is a cap called the well head. Then a pump is placed near to the bottom of the well which pumps water up to the surface through a thin (1-2”) pipe which runs up through the well casing to just below the ground surface and then into your house.(3) Once inside your house it feeds a pressure tank which has a flexible bladder inside. The bladder supplies pressure which allows water to flow to the faucets, showers, toilets, and appliances in the house. When the pressure in the bladder drops due to water use, a pressure switch turns on the well pump, refilling the bladder, until the pressure goes back up and then the pump is turned back off.

The most likely place for methane to accumulate in this system is at the top of the well casing below the well head. Methane in the aquifer can evaporate and rise up in the space outside of the thinner water delivery pipe. In circumstances where the aquifer contains more than 10 mg/L of methane, the presence of a flammable mixture below the well head is quite likely. On occasion, well head fires and explosions have been reported when the well head is opened in the course of maintenance activity. This potential hazard can be mitigated by installing a vent on the well head to let the methane escape and float away. Note that while this will prevent the formation of an explosive atmosphere, it creates an open pathway for the methane, a potent greenhouse gas, to enter the atmosphere.

The second potential place for methane to accumulate is in the vapor space of the bladder inside the pressure tank. As we learned in our discussion of the VLE diagram, when the concentration of methane builds in the vapor space, more and more of it will dissolve into the liquid. This dissolved methane will escape into the house when you use your faucets, showers, and toilets. This is the mechanism purported to be behind the famous scene in the movie Gasland when a man lights a fire in his kitchen sink. Because the sink is an open rather than closed environment, it is difficult (but not impossible) to create a flammable mixture of methane vapor in the sink. But having methane accumulate in your pressure tank can create a possible fire hazard, and attempting to mitigate this situation seems to be the prudent course of action.

Fortunately, it is not difficult to prevent the accumulation of methane it the bladder of the pressure tank. Unfortunately, the solution is expensive. The way to remove the methane is to have the well pump first deliver the water to an unpressurized, vented tank outside the house. The methane in the water will evaporate and exit through the vent of this tank. This process can be sped up by bubbling air through the water. Then the now methane-free water from this tank must be pumped into the bladder of the pressure tank to service the house. The extra tank, pump, and associated valving and controls for this design are not cheap!

As I have outlined, the fire and explosion risks of methane-contaminated well water can be addressed by venting the well head and adding extra tanks, pumps, and bubblers, at least in theory. But the real world often does not care too much about theory. Since the aquifers in North Carolina are not currently contaminated with methane, our wells generally don’t include these safeguards. When fracking does begin here and methane starts to infiltrate our drinking water, I believe that it is unrealistic to assume that these safeguards will be installed in all, or even a substantial portion, of the wells. Who would pay for it?

Furthermore, let’s step back for a moment and consider what is really happening here.  First, the drilling companies are creating a pathway for methane from underground natural gas deposits to reach the aquifers. Then if we make the changes to our water systems I described above in order to prevent fire and explosion hazards, we will be venting methane into the atmosphere!

This is not an acceptable situation. If you cannot demonstrate that you can extract natural gas without getting methane into our water, you should not be allowed to frack.

Have a comment or question? Use the interface below or send me an email to commonscience@chapelboro.com. Think that this column includes important points that others should consider? Send out a link on Facebook or Twitter. Want more Common Science? Follow me on Twitter on @Commonscience.

(1) I contacted the Department of the Interior while researching this column and wanted to note how very pleasant and helpful they have been. The issues of methane contamination are managed by the United States Geological Service (USGS). They were prompt and informative in answering my questions and told me that a baseline study of ground water methane in Lee and Moore counties was underway. Our tax dollars at work!

(2) Long-time readers will know that my father is an emeritus professor of chemical engineering at Penn State. Much of his work centers on thermodynamics, so I suspect that upon reading this he is smiling.

(3) It stays buried underground like this so it won’t freeze during the winter.