Continuing with Part 2 of my fairly-definitive list of the top ten movies of the 1930s. Here’s where we left off:

And we keep going:

5. The Thin Man. “Thin Man” came out in 1934, the same year as “It Happened One Night.” These two movies were the first, I think, to figure out the language and the cadence of comedy on film—in the talkie era, that is—so the modern movie-comedy era really begins here.

That’s neither here nor there, of course—as I said last time, I’m not really so concerned with a movie’s place in film history. Rather, “Thin Man” makes this list because it’s just so damn funny. You’ve never seen witty banter until you’ve seen William Powell and Myrna Loy. It’s not quite as gender-progressive as its reputation suggests: Nick Charles is definitely The Detective here, and Nora is definitely The Detective’s Wife (and in one instance Nick tricks Nora into a cab uptown so he can get his work done undistracted). But as equals in intellect, in wit and in marriage, Nick and Nora are one of the great pairs in movie history.

“It says you were shot four times in the tabloids.”
“It’s a lie. He never got anywhere near my tabloids!”

4. M. Fritz Lang’s masterpiece, a cautionary tale about mob justice in the context of rising German fascism, “M” presents a bleak world where a sadistic child murderer is somehow the most sympathetic character in the room. You want to see him get his just desserts, sure—but there’s something very obviously wrong about the way it happens…

Peter Lorre’s performance as the nameless killer is legendary, but he’s only one of many classic antiheroes who came out around this time: James Cagney as Tom Powers in “Public Enemy,” Boris Karloff as the monster in “Frankenstein,” Bela Lugosi as “Dracula,” Paul Muni as Tony Camonte in “Scarface,” and Edward G. Robinson as Rico in “Little Caesar.” The early 1930s was a very troubling time. (Incidentally, Robinson’s performance is my favorite of the bunch. Edward G. Robinson was good in everything.)

3. Holiday. I’m of two minds on Cary Grant. There are two kinds of Cary Grant screwball comedy: the ones where he hams it up like Jim Carrey on steroids (“Arsenic and Old Lace,” “Bringing Up Baby”) and the ones where he keeps his hamminess in check enough to come off as a believable character (“His Girl Friday,” “The Philadelphia Story,” “Holiday”). For some reason the former tend to have the better reputation, but good Lord I can’t stand Cary Grant in those movies. “Bringing Up Baby” is awful. Awful.

I love Cary Grant, though, when he acts like a real person. I went into “Holiday” not expecting much—it’s the other 1938 Grant/Hepburn screwball comedy; “Bringing Up Baby” is much better-known—but I loved it from the word go. The happily poor Grant falls in love with a rich socialite, thinking her money hasn’t gone to her head—only to find that it has. Her sister, on the other hand…

Katharine Hepburn is so good in this movie it’s incredible. She’s so relaxed in her role, you’ll think she’s improvising—and her character is so likable you never want to see her off screen. (That character, Linda Seton, was actually based on a real-life heiress-who-threw-it-all-away-to-live-a-life-of-adventure. I was so happy when I found that out.)

True story about “Holiday”: as soon as I finished watching it, I went back to the beginning and watched it all over again.

2. The Wizard of Oz. It’s hard to rank this movie. “The Wizard of Oz” is so iconic, so completely entrenched in American culture, that we can’t really see it as a movie anymore. It’s a two-hour stream of famous images and famous quotes, and between “The Wiz” and “Wicked” and “Dark Side of the Moon” we’ve examined and reexamined them all from just about every conceivable angle. In that sense—with the possible exception of “Star Wars”—there’s no other film like it. It’s literally incomparable.

But on this list, it’s got to go somewhere in my top three. When I’m judging movies, I look for three things: a movie has to make me cry, or laugh, or think. And when I’m ranking movies, I look for rewatch value: would I watch this movie again? And again? And again? If so, it goes higher on the list. Well, there aren’t very many movies that I’d gladly watch repeatedly, and really only three from the 30s—“Holiday,” “The Wizard of Oz,” and the flick at the top of this list. So there we go.

Fun game: take one week and keep track of the number of “Wizard of Oz” references you see out there, just casually dropped into conversations and commercials and TV shows and everything else in pop culture. It really is impossible to understand this country unless you’ve seen “The Wizard of Oz” first. 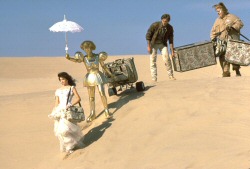 To the point where even a “Star Wars” reference turns into a “Wizard of Oz” reference, sooner or later.

1. Modern Times. I mentioned at the start of last column that this list was going to be a collection of B-sides. Everybody likes “Duck Soup,” but I prefer “Night at the Opera.” Everybody likes “Bringing Up Baby,” but I prefer “Holiday.” (Even “Grand Illusion” is a bit of a B-side: as 1930s French class dramas go, people tend to go with “The Rules of the Game.”) Same goes here: Charlie Chaplin released two movies in the 1930s, “City Lights” and “Modern Times,” and while they’re both highly acclaimed, I think more people prefer “City Lights” by a slight margin.

Not me. Not sure why, but “City Lights” is actually my least favorite of Chaplin’s silent features. (It’s still very good—I just don’t like it as much as the others.) “Modern Times,” though, is a different story. The first 15 minutes is sheer genius on film: hilarious chaos as a working man—the Tramp with an actual job!—gets eaten alive (literally) by technology and machinery. That’s the highlight—capped by the iconic image of Chaplin being run through the gears—but the rest of the movie is stellar too. Like all of Chaplin’s stuff, it’s actually a very depressing movie—two characters struggling desperately to avoid starving to death in a harsh world that dehumanizes and disrespects the individual (in this case, the world of modern technology and modern capitalism)—but Chaplin uses humor, uproarious humor, to make the cry of anger easier to accept, the bitter pill of outrage easier to swallow. “Modern Times” came out in 1936, as the very last gasp of the silent-movie era—in fact “City Lights” was a last gasp too, and Chaplin released that one in 1931. But as it happened, the last movie of the silent era turned out to be the best. 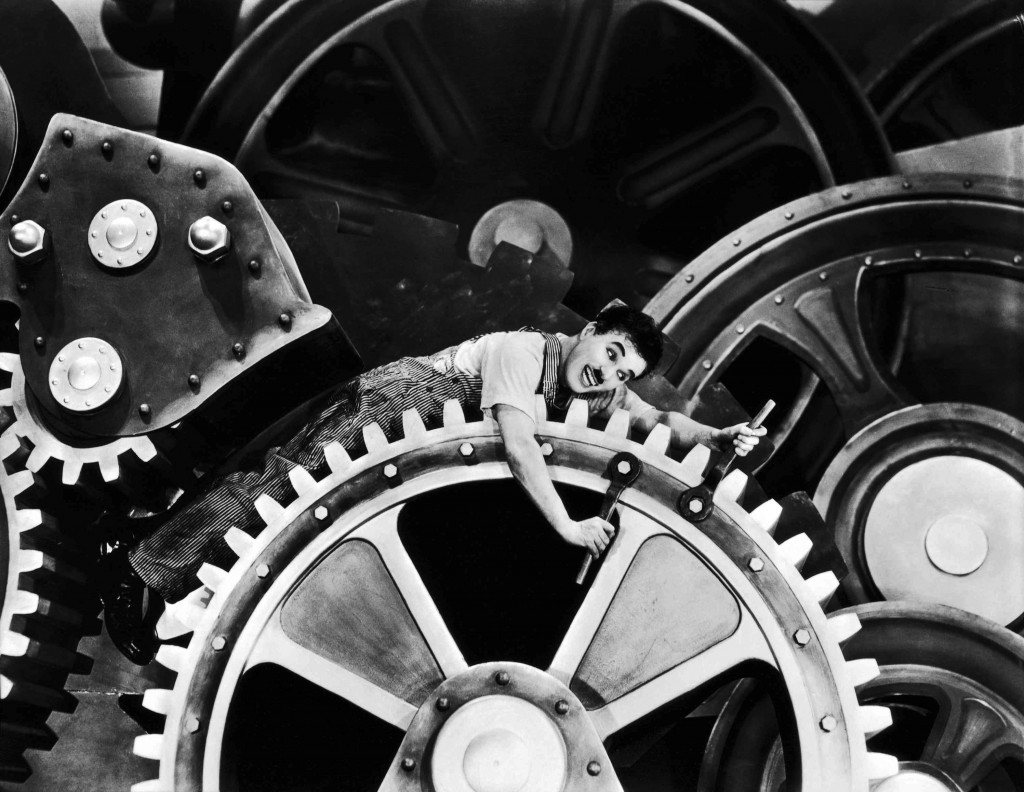 Not that “Modern Times” is a silent movie, per se. Sound actually plays a huge role here, and there is some (minimal) dialogue. (All of it comes out of machines, incidentally: the boss talks to Chaplin through an early TV screen; a salesman makes his pitch via record player.)

And of course there’s the ending, arguably the most brilliant moment in movie history—when the Tramp, now working as a waiter in a busy restaurant, is called upon to sing. It was the first time Chaplin had spoken on screen in one of his own movies, and for many filmgoers it was going to be the first time they’d ever heard his voice. “Chaplin speaks!” It was huge. The whole movie builds up to it. (Remember Chaplin had been the biggest movie star in the world for about 20 years by this point. Imagine George Clooney never saying a word in his movies and rarely speaking in public, and you have a pretty good idea. Hell, we get excited whenever we hear Teller speak.)

But of course it’s a Chaplin comedy, so naturally the Tramp loses the lyrics right before he goes on stage—and proceeds to improvise in complete gibberish.

And that was Chaplin speaking. Perfect.

“Modern Times” is one of those rare movies that makes me laugh, cry, and think. Not even a question that it’s my favorite ’30s film; it may be in my all-time top ten.

So there you have it. (Honorable mention, by the way, goes to “Little Caesar,” “Bride of Frankenstein,” “Stagecoach,” “Ninotchka,” and “The Rules of the Game.” If this were a top 15 list, those would be the extra five.) Which movies did I miss? Comment below!