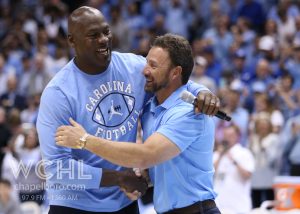 Is the Jordan Jumpman logo already paying off in football?

The night Michael Jordan announced his company’s affiliation with Carolina Football is better remembered for his phrase, “The ceiling is the roof” when talking about the future of Larry Fedora’s program at halftime of the UNC-Duke game last March. The ceiling-roof remark jumped onto paraphernalia with the UNC argyle.

The idea of putting the Jumpman logo – Jordan’s silhouette stretching for the sky – on a football jersey or cleat seemed a little far-fetched, but the power of that brand apparently reaches beyond age and sport limitation. Fedora is lining up his most athletic recruiting class for the fall of 2018, highlighted by a pair of in-state receivers who will be double-trouble on opposite flanks.

Jordyn Adams and Dyami Brown are both 6-2 and about 180 pounds with highlight tapes that show them off as freakish athletes, including dunks on the basketball court. Coincidence, you say?

Adams will play his senior season at Green Hope High in Cary because his father, Deke, moved the family from South Carolina when he took a job as defensive line coach on Fedora’s staff. Still, Jordyn was being recruited by football blue bloods Clemson, Alabama, Ohio State and LSU. Now, after committing to the Tar Heels, the recruiting boards have him as an 87 percent probability to go ahead and sign with UNC next February.

Nationally, Adams is ranked the No. 124th prospect overall and the 23rd best wide receiver. In the state of North Carolina, he has become the overall sixth best prospect. Oh, by the way, on Adams recruiting visit, Carolina unveiled its NIKE Jumpman23 Vapor Speed cleat with the argyle striping down the back and the Jordan spread eagle logo on the side of the three-tone shoe. His video has been updated with him wearing Carolina blue and saying, “I’m a Tar Heel.”

Adams joins a recruiting class that already has another 4-star receiver and a 6-5 quarterback to throw them both the ball. West Mecklenburg’s Dyami Brown, who committed to UNC last April, looks like a carbon copy of Adams in size and speed. He is the state’s top-ranked receiver and number 10 athlete nationally because he also can play safety. Big Tyler Shough from Chandler, Arizona, says he cannot wait to start slinging the ball to both of them while wearing Jumpman as well.

Guess it’s like MJ said, “The ceiling is the roof.”