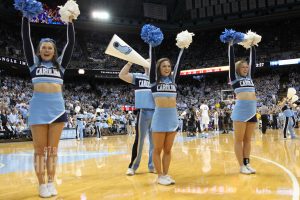 First off, happy birthday to Dean Smith, who would have turned 87 yesterday. Smith always said one of the toughest challenges in college basketball is winning on Senior Night against a very good team with a great player making his last home appearance.

That’s the task facing the Tar Heels, who now must win at Duke to insure a double bye in next week’s ACC tournament and also avoid a lower seed in the NCAA Big Dance. You hate to consider how costly losing on their own Senior Night to Miami could be, but history is now not on their side.

Carolina has almost always played well at Duke, but has rarely won in Cameron when it did not have the decidedly better team or came up with a superlative game against the Blue Devils. That probability drops even more on Senior Night, which is the case this time.

The Heels have won two of the last three Senior Night games over there, both times after being upset by the Blue Devils at the Smith Center. In 2012, the ACC regular season champs avenged the home loss on Austin Rivers’ buzzer beater with a solid 88-70 win in Cameron. That team had Barnes, Bullock, Henson, Marshall and Zeller, five guys who went to the NBA. Two years ago, they lost at home on Luke Kennard’s corner jumper, but went to Cameron, clinched first place again, 76-72, and moved on to win the ACC tournament and reach the national title game.

Last month, Carolina outplayed Duke at the Dean Dome and might be the Devils’ equal on some nights, but not in Cameron against five projected NBA first-round draft picks, including senior Grayson Allen, who has been playing his best basketball of late. Duke led by 12 points early in the first game and was out-hustled and out-shot in the second half. It will be hard for UNC to make as many three-pointers (11) and keep up the same defensive intensity this time.

Think back to the close games and heartbreakers the Tar Heels have lost over there in recent years. In 2014, one-and-dones Jabari Parker and Rodney Hood combined for 54 points to run off to a 12-point victory. In the 2015 mid-season game, the Heels blew a late 10-point lead to the eventual national champions. They squandered an even bigger lead in 2011 and lost another close game in 2013.