CHAPEL HILL – UNC’s reputation is once again being tainted by  a CNN article released Tuesday that claimed the University admitted a basketball player who couldn’t read or write, among other accusations. 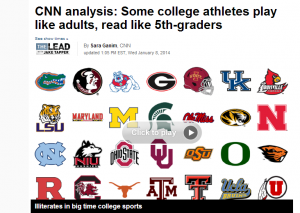 Article as it appears on CNN.com

And now, Mary Willingham who is currently employed at UNC as a clinical instructor and academic advisor, told WCHL that she has received death wishes and hate email since the CNN article was published.  When contacted by WCHL, she said she didn’t want to comment further until the threats subsided.

Willingham spoke to CNN based on her encounters with Carolina athletes and is the source of the claims about the University.

Steve Farmer, Associate Provost and Director of Undergraduate Admissions, spoke with WCHL News to address the claims surrounding the admissions process at Carolina.

Farmer said he was not in the room when an alleged conversation between Willingham and an unidentified UNC player discussing his level of literacy occurred, so he cannot speculate about what was said.

Farmer did offer one guarantee.

“I can tell you, we do not admit students who we believe cannot read or write,” he said.

Willingham has been employed by UNC since October of 2003, according to her resume posted through the University’s Learning Center.

The basketball player who  Willingham said could not read or write is believed to have played during the Roy Williams era; he became head basketball coach in the spring of 2003. Willingham started as a learning specialist/tutor at the University in the fall of this same year.

UNC released a statement Wednesday evening in response to the article:

In an excerpt: “We do not believe that claim and find it patently unfair to the many student-athletes who have worked hard in the classroom and on the court and represented our University with distinction.”

“Anybody can make any statement they want to make, but that is not fair,” Williams said. “The University of North Carolina does not do that. The University of North Carolina does not stand for that. I don’t believe it is true, and I am really bothered by the whole thing. People have taken their chances and have beaten up on us for quite a while. We are going to survive this. I am really proud of my kids.”

As a graduate student at UNC Greensboro, Willingham researched the reading levels of 183 UNC football or basketball players from 2004 to 2012. She said that she found that 60 percent read between fourth- and eighth-grade levels. She found that between eight percent and ten percent read below a third-grade level.

Willingham shared similar observations with the News and Observer in November of 2012.

Tuesday’s CNN article cites its own research that reveals that between seven and 18 percent of revenue sports athletes read at an elementary school level.

CNN said that the data collected was based on the SAT and ACT entrance exam scores of athletes who play football and basketball.

According to the “academic experts” CNN consulted, the threshold for being college-literate is a score of 400 on the SAT critical reading or writing test. On the ACT, that threshold is 16.

“CNN didn’t ask the University for any official data,” Farmer said. “I mean they just didn’t ask, so I don’t really know how to assess the claims that CNN has made.”

CNN reported that UNC officials initially said they weren’t aware of Willingham’s research concerning Carolina. The article also stated that officials changed their response after being presented with emails that showed she had obtained approval to conduct the research, and that she shared her findings with University officials.

According to supplemental information in the article, CNN  reports  hat UNC officials then told CNN that they planned to meet with Willingham to discuss her findings.

Farmer said in the past two academic years, UNC has enrolled 321 student athletes. Of those student athletes, only two didn’t meet the “CNN threshold.” He said they were both from rural areas and made strong grades in high school.

There is no University policy, Farmer explained, that sets a minimum standardized test score to qualify a student as ineligible for admission.

When asked if athletes are treated differently during the admission consideration process, Farmer said that the Office of Undergraduate Admissions doesn’t have a set formula, adding that each student had fairly earned their spot at Carolina.

UNC has been at the center of controversies in the past, including the academic scandal in the African and Afro-American Studies Department; an NCAA investigation that resulted in the firing of UNC’s head football coach; and multiple athletic department resignations; and eventually the resignation of former Chancellor Holden Thorp.

CNN reported that, iIn the wake of the scandals, UNC has made “120 reforms…to ensure there are no academic transgressions.”

The Student Athlete Academic Working Group is one of those reforms. Members include Farmer, Athletics Director Bubba Cunningham and Provost Jim Dean.

Farmer said the goal is to document the student athletes from recruitment to graduation and possibly beyond.