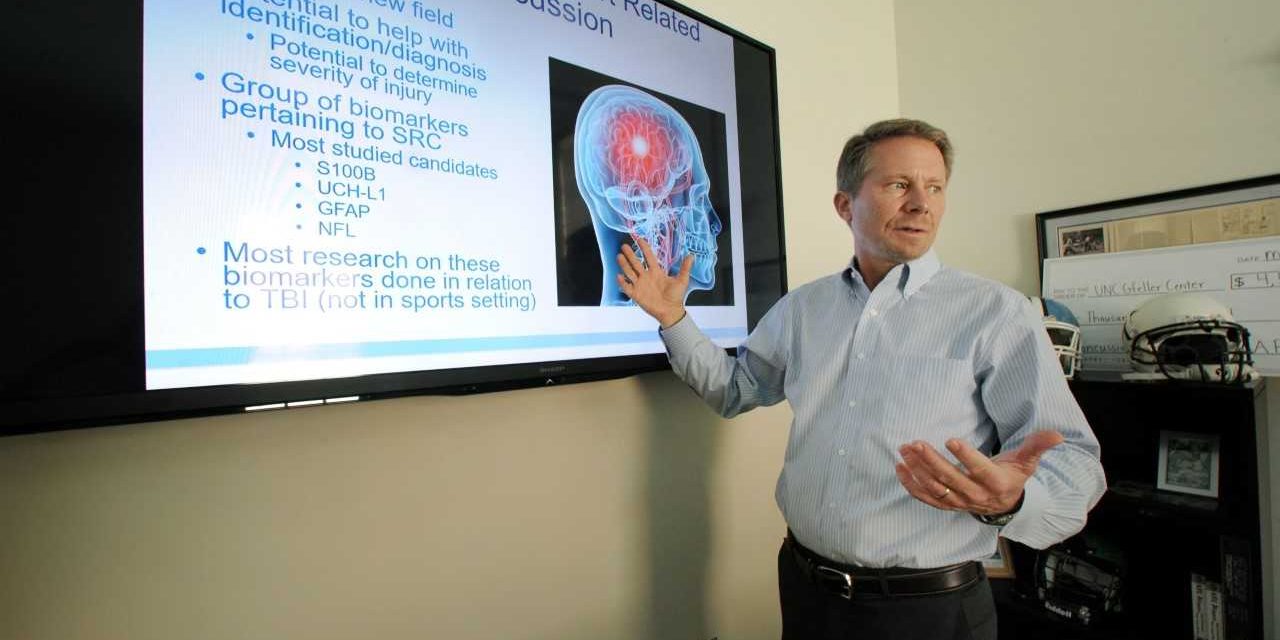 Kevin Guskiewicz, dean of the UNC College of Arts and Sciences, has studied traumatic brain injury in former-athletes for nearly two decades, after founding the Center for the Study of Retired Athletes in 2001.

Now, the center’s research into CTE, or Chronic Traumatic Encephalopathy, will take a huge step forward as a result of a new study announced last week funded by a grant from the NFL.

In partnership with the Harvard Medical School, Boston Children’s Hospital, and the Medical College of Wisconsin, UNC will help manage a project tracking 2,500 former-NFL players. They will look for signs of CTE, which is characterized by the build-up of proteins in the brain, and has shown to be connected to repeated blows to the head and concussions. Those exhibiting symptoms of that brain injury will undergo closer exams and research evaluations. In several years, those athletes will have the option to join a novel clinical program to treat CTE being developed at Boston Children’s Hospital.

This study is particularly game-changing, because it looks at the largest group of former-NFL athletes so far, then compares data collected over the nearly 20 years. Perhaps most crucially, the study looks in CTE in live patients. To date, Guskiewicz said, CTE has only been identified in deceased athletes, during autopsy.

UNC will host the athletes participating in the study from the East Coast, while the Medical College of Wisconsin provides a convenient location for NFL players based in the Midwest. Guskiewicz said many of the participating players are eager to participate in this study and help address the issues surrounding CTE.

“There’s been this stigma attached to many of these former-athletes who’ve played lengthy careers. The stigma suggesting that they are ‘damaged goods,’” he said. “Many of them want to be out their contributing to society and holding a job for many years after their playing years have finished.”

In recent years, there have been a few policy and equipment changes in the NFL, many at the urging of Guskiewicz, to tackle concerns over repetitive concussive injuries in athletes.

“I think the game has to change, but we have to study it to make sure that the changes — the rule changes, policy changes, equipment changes — that are being put into place make sense,” he said. “That they are, in fact, effective in improving safety in sport.”

Back in 2011, Guskiewicz and The Center for the Study of Retired Athletes helped pass a rule change surrounding kick-off procedure, leading to a 50 percent decrease during those plays.