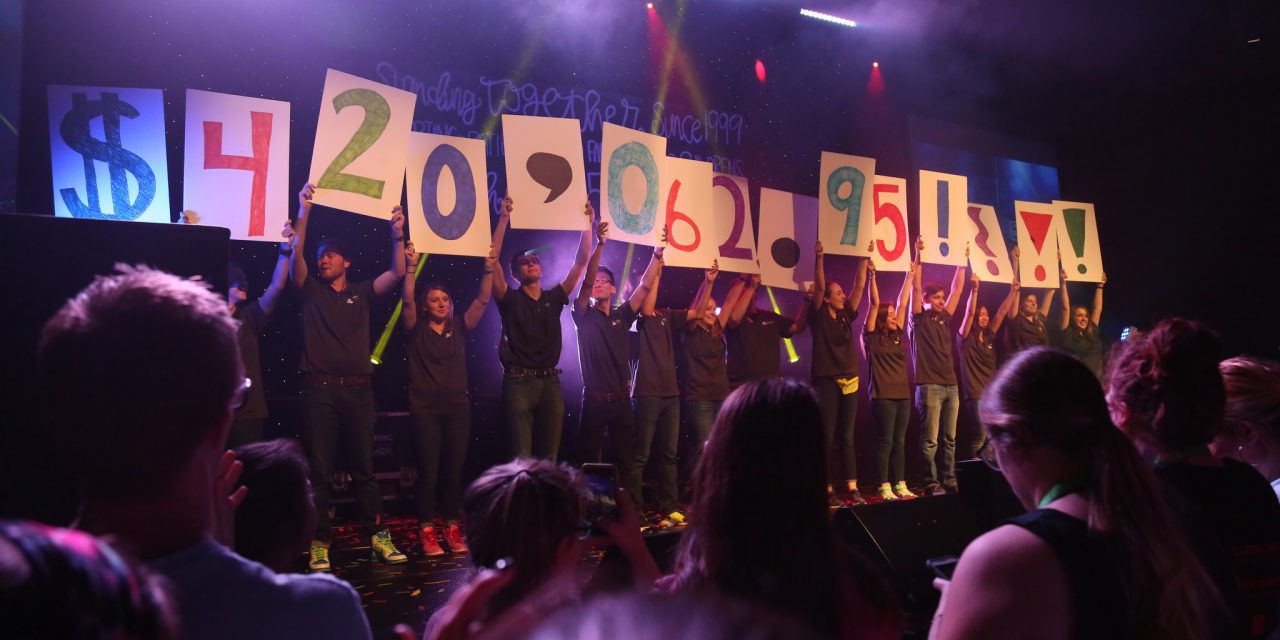 It’s 4:45 in the afternoon on a Saturday and hundreds of UNC students stand pressed against a stage in Fetzer Gym on campus. They’re sweaty, swollen and exhausted. But they’re enthusiastic and excited. They’re listening to a kid tell knock-knock jokes.

It’s the annual UNC Dance Marathon thrown by Carolina For The Kids (CFTK). The knock-knock jokes were part of the Kid Co-Captain talent show, only one of the hours in the 24-hour no sitting, no sleeping event. CFTK Executive Director Elizabeth Brown said it’s one of her favorite parts every year.

“When I think of Carolina For The Kids, that’s what I picture,” she said. “We’re able to turn such a normal, mundane moment for these kids, the most normal they can get– into something so special.”

Carolina For The Kids raised over $420,000 to support the patients and families of UNC Children’s Hospital. Every year, the student-run non-profit raises money for things that families need when their child is in the hospital, but insurance doesn’t cover. In past years, money has gone toward things as small as gas cards to things as big as Parents’ Night Out – an event in which CFTK delivers hot meals to families in the hospital.

“Being on the Executive Board of Carolina For The Kids and being a full-time student is a big responsibility,” said 2017 Publicity Chair Jacob Blount. “And I’ve definitely had a great pleasure of working with very dedicated committee members, which has been helpful.”

Blount said CFTK raises money all year long, but the biggest event and fundraiser is the Marathon. It’s planned by fourteen committees, each with a chair, overseen by the Executive Director. He said there are many jobs: recruiting dancers to pledge to dance at the Marathon, helping those dancers each raise $150 and even giving those dancers tips to stay on their feet. 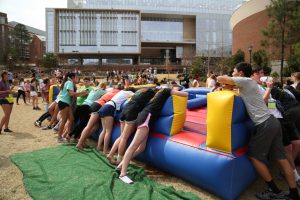 Dancers rest on an inflatable during the 2017 UNC Dance Marathon. Photo via Carolina For The Kids.

“Change your shoes every four hours, roll your feet on tennis balls,” Blount said. “Small things like that. Use ice packs if you need. Definitely drink plenty of water. So to stay up, you often times will drink a lot of caffeine, but that will dehydrate you and you don’t really realize it until you’re dehydrated completely.”

There are different events and activities within the 24 hours to keep minds and feet occupied. There are henna tattoo stations, jewelry-making stations, Zumba and walks in the quad. There’s even a pump-up song every hour to keep dancers moving. 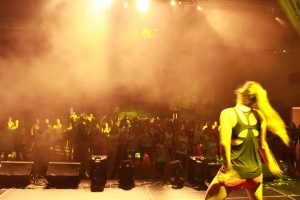 Dancers do Zumba at the 2017 Dance Marathon. Photo via Carolina For The Kids.

But they’re standing in support of the families of patients of UNC Children’s who sometimes have to stand for much longer. Judy Ward is the mother of 17-year-old twin Kid Co-Captains, and says the Dance Marathon, and the money it raises, have an important impact on her family.

“The things you do allow me to look at my children as they’re getting ready to launch out into their life—their college career and thinking about that,” she said. “Having that to look forward to… when almost 17 years ago, I had a 20 percent chance and a 40 percent chance of staying a mom.”

Blount said it’s most important to remember that everything, the standing and the money, is supporting families like Ward’s.

“Listening to how my fundraising and my standing for 24 hours made such a great impact,” he said. “And I’m very comfortable in sharing that that’s felt among almost everybody that’s present.”