CHAPEL HILL-Dozens of local residents and elected officials gathered Saturday afternoon at the Orange County landfill as the facility ceremoniously closed its doors for good.

Rogers-Eubanks Neighborhood Association and Chapel Hill-Carrboro NAACP President Minister Robert Campbell was instrumental in the effort to shut the landfill down—and to highlight the occasion, he delivered a few remarks during the event.

“We want to thank Orange County for closing this landfill, and let us keep up the fight, because there are other communities that can benefit from what Orange County is doing,” he said.

To begin the ceremony, the attendees marched from the Orange County solid waste administrative headquarters to the landfill itself, located about a block away. After Campbell’s speech, with the crowd cheering, he placed the lock on the landfill gate for the final time.

The landfill is situated near the historically black Rogers Road neighborhood. For several decades, neighborhood residents have said the site has caused problems with vermin, noise, and unpleasant smells.

“I’ve been in this neighborhood since 1963, and we’ve been fighting the landfill ever since,” says Barbara Hopkins, who’s a longtime member of the Rogers-Eubanks Neighborhood Association. “This is a victory for me, and I’m so happy just to see that gate locked.”

While most of the ceremony’s attendees were glad to see the end of the Orange County landfill, many were also there to denounce a bill that would loosen some of the requirements for new landfills in the state. Supporters of the statewide legislation, which is formally known as Senate Bill 328, have said it would help meet certain waste-related demands; meanwhile, opponents have said, among other things, that it would allow too much out-of-state trash to come into North Carolina.

Campbell says if the bill is approved, it will be a setback for surrounding communities.

“We’re thanking Orange County for closing the landfill, but we want to keep it closed forever,” he says. “We’re looking to enhance the quality of life for everyone over the state. We don’t want a mega-landfill in Orange County where trash might be coming in out of Philadelphia or New York.”

Orange County’s solid waste will now be temporarily taken to the Waste Disposal and Recycling Center transfer station in Durham until County Commissioners can develop a more long -term solution. Jacobs says the permanent fix should involve an alternative technology, possibly in partnership with neighbors of Orange County.

“The technologies are expensive and they’re not necessarily proven, certainly not in North Carolina,” he says. “We might not have a large enough waste stream to go at it on our own, so we have to find partners.”

County Commissioners first made the decision to close the landfill in October of 2011. Saturday was the last day that waste was accepted, and Sunday is the official day of closure. The site’s shutdown marks the end of 41 years of activity in Orange County. 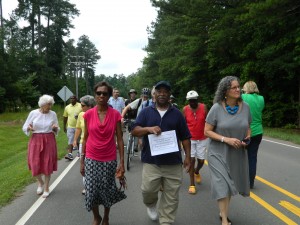