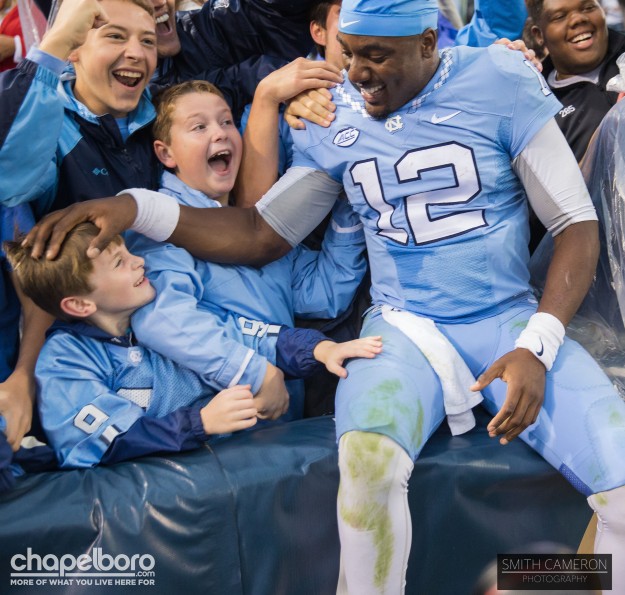 With four minutes remaining in the first half, the UNC football team had just let Georgia Tech run the ball down the field for its third touchdown of the game on its third drive of the game.

Down 21-0 at that time, all hope looked lost for Head Coach Larry Fedora and his team.

But the Tar Heels stayed resilient, fighting all the way back to defeat the Yellow Jackets 38-31 on Saturday–the biggest comeback in team history, and its first win in Atlanta since 1997.

UNC wins its fourth consecutive game and moves to 4-1 on the year, opening ACC play 1-0 for the first time in Fedora’s four-year tenure. The Yellow Jackets, meanwhile, have now dropped three straight contests, and fall to 2-3 with an 0-2 record inside the conference.

“Just a lot of guts from this team,” Fedora said about the comeback. “In all three phases. Just a tremendous team effort.”

After questions about a possible quarterback controversy dominated the headlines in Chapel Hill this week, senior Marquise Williams was electric against Georgia Tech. 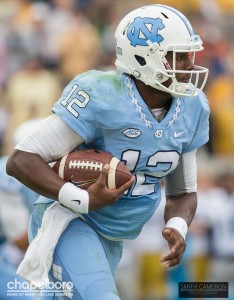 He was efficient throwing the ball, going 13-for-24 for 134 yards–but it was with his legs that he did the most damage. Fifteen times he carried the rock himself, tallying 148 yards and two touchdowns on the ground–not to mention hauling in a receiving touchdown that swung all the momentum over to the boys in light blue.

“This is our chance right now,” he continued. “And I’m seizing that opportunity to do something different around here”

Oddly enough, it was a wide receiver–senior Quinshad Davis–who threw the game’s most important pass. Trailing 28-24 in the fourth quarter, Davis took a hand-off on what looked like a reverse play. However, Williams slipped downfield and Davis threw him a 37-yard bomb that gave UNC its first lead of the day.

“I was looking, and I was like ‘This ball is in the air too long,'” Williams said about the crucial catch. “I said, ‘If I drop this, I am not allowed to go back to Chapel Hill.'”

Sophomore tailback Elijah Hood also contributed a pair of rushing touchdowns on 12 carries, racking up 60 yards in the process. 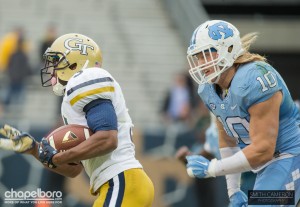 Georgia Tech was led by quarterback Justin Thomas and fullback Patrick Skov, each of whom ran the ball for 56 yards. Early in the game Skov was unstoppable on runs up the middle, consistently churning out first downs that kept the Tar Heel offense off the field.

Thomas completed 12 of his 21 passes for 162 yards–throwing one touchdown and an interception on the game’s final play.

The first sign of a potential comeback was at the end of the second quarter when Williams led the Tar Heels on a nine-play, 75-yard touchdown drive in just over three minutes.  After forcing Tech to punt, UNC got 56 seconds to try and add another to their tally before the break.

They would do just that–as Williams drove the team 37 yards before running it in from seven yards out–cutting the halftime deficit to just 21-14.

A 37-yard field goal from Nick Weiler on the first possession of the third quarter brought the Tar Heels to within four points, but the Yellow Jackets responded with a touchdown drive of their own.

Thomas found freshman Mikell Lands-Davis for a 19-yard score, bringing the lead back to double digits.

A subsequent Hood touchdown brought UNC back within four, but the Yellow Jackets seemed intent on closing this one out.

Reaching the Tar Heels’ 1-yard-line on 3rd-and-goal, it seemed like another score would be a formality. But the defense held strong, stuffing Thomas on 4th down to keep the dream alive.

UNC punted on its next drive, handing the ball right back to Georgia Tech. Then, defensive lineman Junior Gnonkonde forced a fumble, which was recovered by the Tar Heels at the Tech 37-yard line.

“When you get down 21 points you tend to worry about ‘Do we need to score every series?'” Fedora said. “And I thought [offensive coordinator] Seth [Littrell] did a really good job just continuing to do what we do. And the kids responded really well.”

What happened next will go down in history, as Davis found Williams for the game’s signature moment–giving the visiting team its first lead of the afternoon. 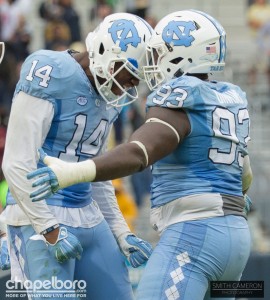 A 27-yard rushing touchdown by Williams on the next drive extended the lead to 10, and just about sealed it up.

The Yellow Jackets kicked a field goal with 2:46 to play, but were not able to muster anything else–giving Fedora perhaps the most important win he’s had during his time in Chapel Hill.

UNC has its bye week next week, taking to time to rest and prepare for its next contest–an October 17th home game against in-state rival Wake Forest.