Art’s Angle – Not By A Long Shot 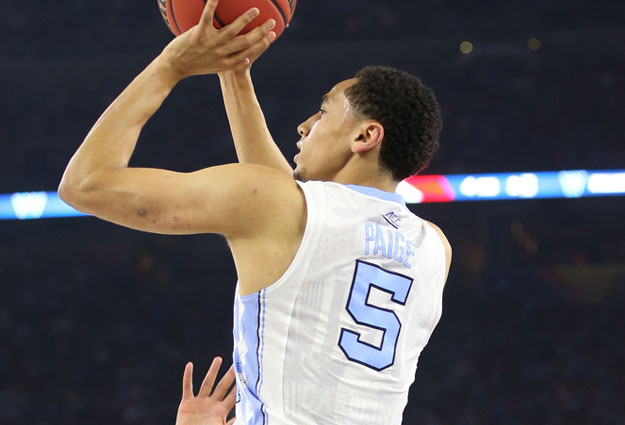 HOUSTON – Carolina lost, but Tar Heel Nation turned out loud and proud from alumni to everyday fans to his Airness Michael Jordan, who descended to his eighth-row seat during the darkness of the starting lineups and, like Michael Jackson, appeared in a powder blue pullover when the lights came back on.

After that, MJ was any fan, on his feet most of the game, clapping and showing his displeasure with several calls that went Villanova’s way. During every timeout, as security surrounded Jordan, the pantheon of more than 50 former UNC players continued their impromptu reunions, almost all of the 2005 champions group mugging for dozens of cell phone cameras straining to get a clear shot. Jordan sat right in front of Lennie Rosenbluth, two Tar Heel legends 25 years apart piggy-backing on aisle seats. During one TO, the 2009 titlists were feted as they were in school when Jump Around blared over the PA and Danny Green revived his Dean Dome dance. Though far too many more to mention, the formers went from Antawn to Bell (Mickey) to Capel (Jason) to Dante (Calabria) to Ellington to Felton and Ford to Grubar to Lynch to Manuel, to Shammond all the way to Brandon Wright and Al Wood.

While a wholly uniformed national media stayed on the NCAA scandal story and pounced on the sometimes-too-candid Roy Williams, UNC fans poured into Houston to underscore they don’t give a damn what the NCAA says when it gets around to saying it. This is an athletic program that has flourished in the face of institutional inertia, winning football and basketball championships and continuing as the highest-ranked Olympic sports program in the country.

As spectacular of a show the heavily trademarked March Madness, Road to the Final Four and the Road Ends Here provides for millions, the Final Four is an exercise in greed. When the NCAA went to football stadiums more than 30 years ago, at least it placed the court in the end zone and closed in the “other” sideline with steep temporary stands; since 2009, the NCAA now puts the raised floor on the 50-yard line, where the seats slope away from the court so gradually that the 20th row is shockingly far from the action.  And in the upper decks and end zones, those people must buy tickets to say they were there and watch the game on TVs mounted on every overhanging portal. Of the 75,000 seats, barely five thousand offer a quality basketball view.

The 2016 championship game is already labeled as the greatest ever played. No matter how much of a stinker Final Four Saturday was, a great Monday night leaves THE lasting impression. For Carolina, the only regret is finishing on the wrong end of the 77-74 score. One talking head earlier in the day predicted “the last ball in the air will win.” Indeed it did.

And while the texting world and blogosphere is full of claims and supporting videos on what the Tar Heels did not do defending Nova’s last possession after Marcus’ miracle three, that truth is offset by a defensive-fueled 17-7 run that forged the ninth and last tie of the game. With Roy Williams calling for traps and double teams, the Wildcats committed two turnovers and missed two field goals and also two free throws in letting Carolina back in.

The Tar Heels scored on seven of their last nine possessions to tie the game on a shot that would have been acclaimed forever if they had gotten the game into overtime with a clear psychological advantage. Yes, they did botch Nova’s last rush up court by not shadowing in bounder Kris Jenkins and letting him line up his laser shot before Isaiah Hicks came flying at the ball, hand fully extended. Brice Johnson will forever regret not coming out quicker after protecting the paint against a long pass, as will Paige and Justin Jackson who wound up covering the same guy in the far corner. As with all games, there were so many other plays that could have made the rally for overtime unnecessary. In missing 23 of its 35 second-half shots, Carolina had the ball below or on the rim numerous times and particularly Kennedy Meeks, who shot 1 of 8, could not convert. Despite a 36-23 rebounding edge, the Tar Heels had to stay with the hot-shooting Wildcats but failed in the second half.

Jackson, who went 3-3 from the arc in the first half, was still stuck on nine points when he missed two free throws with less than three minutes left. JJ was clearly screwed on his breakaway in the final seconds of the first half, UNC leading 39-32 at the time. Full-bodied from behind by Nova’s Josh Hart as he blocked Jackson’s layup, the no-call resulted in a fast break going the other way that finished with Phil Booth’s jumper to end the half. The four-point swing cut Carolina’s lead to five when it should have been eight or nine.

Normally, you can discount earlier plays in the game, but not this game. Smart and relentless Joel Berry letting the ball roll in twice late saved precious seconds that, ironically, gave Jenkins the time to be a hero at the buzzer. These Tar Heels wanted so badly to finish the job they had started 10 games ago but could not, literally, by a long shot.

Williams: ‘I Was Able To Coach a Magnificent Group of Kids’