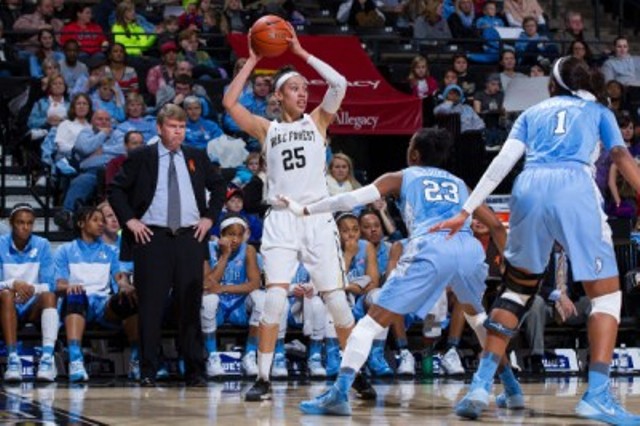 WINSTON-SALEM– The No. 7 North Carolina Tar Heels women’s basketball team pulled away from the Wake Forest Demon Deacons late in the contest Thursday night to claim an 83-65 victory and improve to 17-3 overall and 5-1 in ACC play.

Freshmen Diamond DeShields and Allisha Gray each put up 19 points to lead the Tar Heels to their 11th straight win in the series.

With the loss, Wake Forest dropped to 10-9 on the season and 1-5 in conference action.

Xylina McDaniel and Stephanie Mavunga added nice contributions of their own, at 12 points apiece. Mavunga also nabbed 12 rebounds in the contest, giving her a tenth double-double of the season.

Dearica Hamby led the scoring charge for the Demon Deacons with 22 points, but it wasn’t enough to overcome the Carolina attack.

The game was tight until the final minutes with the score tied at 56-56 with 8:22 remaining.

Carolina made its final eight free throws to wrap up the victory, its 12th in the last 13 outings. Wake Forest’s 27 turnovers certainly helped the Tar Heel cause. UNC converted those miscues into 35 points.

Next up for the Tar Heels is a Thursday night meeting with Syracuse in Carmichael Arena.

You can view the final box score here.